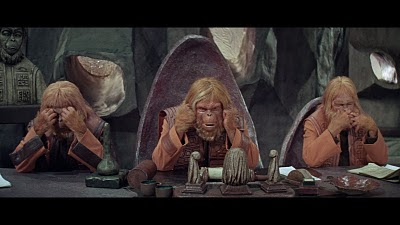 Remembrance of Viewings Past: I heartily admit to a sentimental attachment to the original Planet of the Apes. I first saw it when I was very young and have probably seen in at least in part a dozen times since.

The movie starts with three American astronauts landing hundreds of years in the future on a remote planet. The cynical Taylor (Charlton Heston) leads this band in the search for water or other life forms. They slowly find clues of life and hints of a civilization during the first thirty minutes of the movie. The reason I bring this up is because it is an important part of the building of suspense and introduction of Taylor’s character. The audience knows that they are about to run into a civilization where apes rule. Even if you are seeing it for the first time, we know what the title is! We know what is going on, but the astronauts don’t. It’s a slow trek, but it’s necessary for the plot. I also love Jerry Goldsmith’s score, which is used to full effect during the early scenes.

Anyway, here are a few other thoughts on Planet of the Apes.

1. The desert setting in the early scenes: Why do I like the early scenes so much? We don’t know where the story is going (even if we do know, you understand?) It’s called building suspense.
2. Little touches; The distibution of power, the see know evil, hear no evil, speak no evil pose that the orangutan’s have while Taylor is giving them unwanted truths. The character of Lucius, who is basically an ape hippie without being over the top, the sacred scrolls, the Forbidden Zone and let’s not forget Heston’s concubine Nova.
3. Memorable lines “Get your stinkin’ paws off me, you damn, dirty ape!” Come on, is there a better line as well timed in any movie than that one?
4. The makeup. If the viewer didn’t buy the makeup, the party was pretty much over. Luckily, we bought it.
5. The Turkish cave architecture of the ape village gives the story the otherworldly appeal it needs.
6. Changes from the original book-The Eiffel Tower from Boulle's novel? I don’t think so.
7. The performances-Maurice Evans as the politician Dr. Zaius, Kim Hunter and Roddy McDowell as the sympathetic chimpanzees, but don’t forget Charlton Heston as the cynical astronaut.
8. The ending-One of the greatest endings of all-time.
9. The sequels? Well, the four sequels are a mixed lot. The best of the bunch is probably the third installment where Cornelius and Zira escape on Taylor’s old ship and return to 1973 earth! It was about the only way they could keep the series going since a hydrogen bomb goes off at the end of the second movie. The last two installments in the series have their moments, epecially Conquest of the Planet of the Apes where we see the beginning of the ape uprising beginning to take place. After the movies played out, we had a short-lived television show Planet of the Apes, which was pretty so-so, but I watched every episode (All 13!)
Posted by 1001: A Film Odyssey is produced, directed and written by Chris, a librarian. at 1:39 PM