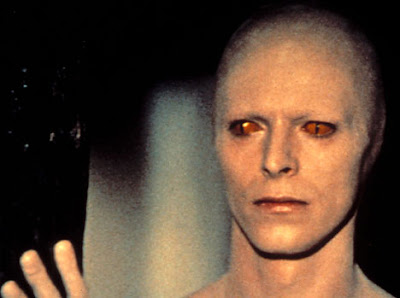 Remembrance of Viewings Past: I saw this at the Rhodes repertory theater during the 1980’s. I believe it was on a double-bill with Zardoz. I have a positive but fading recollection of The Man Who Fell To Earth,and am curious how I will relate it now.

Seeing it now, I think David Bowie was perfectly cast as a very understated alien who comes from a dying planet. And Candy Clark as the leading lady is terrific. It’s a hard movie to explain and don’t know if a sci-fi movie like this could be made today. I don’t think The Man Who Fell to Earth action figures would sell too well. I’m also wondering if it is close enough to Christmas to listen to the David Bowie/Bing Crosby Little Drummer Boy duet. But I digress.
Posted by 1001: A Film Odyssey is produced, directed and written by Chris, a librarian. at 1:39 PM