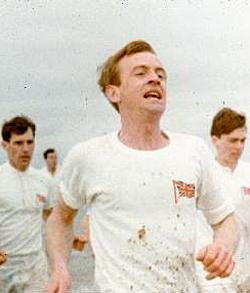 * This post really has nothing to do with Chariots of Fire, I just needed a blog heading.

Whenever I don’t have a particular movie in mind for a blogpost, I have used Chariots of Fire for my heading. I’ve done it about ten times, in fact. I had never seen the movie before, so I decided it was finally time to see it and find some other heading to use for posts of this nature. I thought about using some 60’s film that I had never watched such as Russ Meyer’s Faster, Pussy Cat! Kill! Kill! Or The Man Who Had His Hair Cut Shortt, but nothing seemed quite right to take the place of Chariots of Fire. It’s like playing the Kevin Bacon game using someone other than Kevin Bacon in that you can do it, but it just isn’t quite the same. So it looks like I will continue to post Chariots of Fire as a heading when I can’t think of anything else. I guess we can all rest easy now.

Oh, yes. The point of this particular post is that I’ve now seen 500 of the movies from the big 1001 list. Logically that should be about half of 1001 (Exactly half if you work it. I’m not sure how, but I do know the ½ from Fellini’s 8 ½ is somehow involved.) But alas, updated lists have put the current total of the 1001 list at 1103 and continues to grow.

So being 45% done isn’t quite as good as being 50% done, but there you have it.
And at least this will give me more opportunities to make random Chariots of Fire posts.

Posted by 1001: A Film Odyssey is produced, directed and written by Chris, a librarian. at 1:35 PM