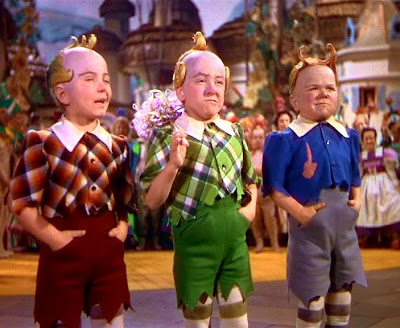 The three leaders of the Lollipop Guild sat on the second step above Munchkin Pond in the center of Munchkin Square as they stared out in the general direction that stretched out past the yellow brick road.

“What do we do now?” said Jerry, the loose cannon of the Lollipop Guild.

Harry, the unofficial leader of the Lollipop Guild drew a heavy sigh. “We wait.”

Paul, the third member of the Lollipop Guild patted Harry on the knee. “Well, I’m completely confident. I’ve never met anyone like this Dorothy before. That girl is simply FABULOUS!” Paul fluttered his fingers to accentuate his enthusiasm.

Jerry growled at Paul, who stuck his tongue back at Jerry before briskly walking away.

“Why do you have to antagonize him?” Harry asked.

“Ah. I don’t get Paul. He’s weird. He never wants to join us when we got tomcattin’ after the Lullaby League. I’ve never seen him even interested in any girl until this Dorothy came crashing down on us. What did he say about her again?”

He said something like “Dorothy rocks my world, I think. Look, you have to admit the girl did save us and Glinda said-”

“Glinda.” Jerry interrupted. “Glinda is a game player. I never understand her riddles. And what was that she said about the ruby slippers? I didn’t get that. And is she ever around when we need her? But…on the other hand, she is rather pleasant to look at, don’t you think? Tell me Harry, do you ever think about…big girls?” Jerry raised his eyebrows as he took a prolonged lick from his lollipop.

Before he could finish, Harry snatched it away from him. Jerry fumed in protest, but remained silent.

The Mayor of the Munchkin City waddled up to them. “Harry,” he said. “I think this is a great day for Munchkin Land. This Dorothy will save us from outside influences. We will then become an autonomous body within the Land of Oz. We will achieve statehood. Independence. We may even become a duchy. Or maybe a regency. Maybe even a province.”

Jerry could only shake his head at the Mayor’s rant.

“I’m not sure what that all means, Mayor.” Harry said. "But Jerry is right in that we are no safer now than we were before and the Witch of the West will be after us more than ever.”

“Hmmmm,” The mayor said. “Do you want me to issue a proclamation? Sign a treaty? Declare a holiday? Should the town engage in another chorus of We’re off to see the Wizard? I’ll think about it and we’ll hold a meeting. But first we must hold a meeting to determine if we should hold a meeting. Then we’ll vote on it. Then we’ll decide if the votes count.” The mayor’s voice trailed off as he walked away from them.

Harry and Jerry turned back to the yellow brick road, which seemed to stretch out even farther into to the unknown than it did just a few minutes ago.

While making the rounds to make sure that everyone in Munchkin Land was still alive, the Munchkin Coroner was the first to witness the black smoke in the distant clouds. He whistled and the Mayor and the Lollipop Guild came to him at once.

They walked to the tip of the Yellow Brick road with Paul of the Lollipop Guild carting the only known pair of binoculars in Munchkin Land. And they were designer ones to boot!

The mayor signaled for Paul to hand the binoculars to him to read the message, but he took so much time making sure he was situated properly that Jerry grabbed the binoculars from Paul and looked into them.

“S-U-R-R-E-N-D-E-R D-O-R-O-T-H-Y” he read. Jerry brought down the glasses and glared at them all, waiting for a response.

“Liar!” Paul screamed in his high-pitched voice as he grabbed the binoculars back.

When Paul acknowledged that the message was as Jerry said, he dropped to his knees. “Oh, Dorothy. Sweet, wonderful Dorothy. How can we help you in your time of need?”

“Don’t worry, Paul,” Harry said. “That witch will pay for this. And we still really don’t know what’s happening.” Harry turned to the Mayor. “You’ve got to speak to them, mayor. You’ve got to prevent a panic.”

Beads of sweat ran down the mayor’s face. He opened his mouth to speak, but nothing came out.

“When would be a good time to panic, Harry? We’ve put all our eggs in the Dorothy basket and came up snake eyes.” Paul hesitated for a moment wondering if his comment made any sense before continuing. “The Witch of the East was a pussycat compared to Witch of the West. Dorothy should never have made her mad.”

Paul pushed at Jerry. “Don’t talk about my Dorothy that way. You aren’t fit to shine her ruby slippers, let alone put on a pair.”

Jerry eyed Paul with suspicion. “I’d never want to wear a pair of ruby slippers. But I’m thinking you might.”

“What are you trying to say?” Paul said. Arms akimbo, as Jerry approached to him.

Before they could continue, Harry stepped between them. “Never mind all that you two. We’ve got a crisis on our hands.”

The mayor looked at Harry. “Flying monkeys, Flying monkeys," the mayor said with a stutter. "We need to hold a meeting.” The mayor wiped beads of sweat off his expansive forehead.

“No mayor! Don’t scare them with talk about flying monkeys. We mustn’t forget those creatures are no bigger than we are,” Harry said.

“Yeah,” piped in Jerry stepping in front of the mayor and facing the rest of Munchkin Land. "Except they have sharp teeth, they can FLY and they have direct orders from the wicked witch to KILL us! Nothing to worry about there!”

The rest of the munchkin population that had gathered began buzzing and scampering nervously around the square.

“What in blazes is that? Jerry asked, looking up. “It’s coming our way!”

With a frightened look of recognition on his face, Harry yelled. “It’s the Wizard of Oz floating away in his Omaha State Fair balloon!”

The munchkin people scurried around aimlessly, screaming at the top of their tiny lungs.

The mayor silently held up his arms, signaling the Munchkin people to cease their panic, but no one seemed to be paying any attention to him.

“All is well,” the mayor finally managed to get out. But as he looked around at the ensuing riot, he changed his tune. “Never mind. We’re toast.”

The mayor walked to the first step above the Munchkin Pond. He cupped his hands together and dropped face first into the Munchkin pool. As soon as he hit the water, his body remained unmoving, the flow of waves washing gently over his still body.

Paul pulled his own hair and screamed once again for Dorothy.

The Munchkin coroner toddled to the Munchkin pool with his medical bag to check on the mayor. In a blind rage, Jerry grabbed the yummy part of his lollipop and jabbed the butt of it through the coroner’s chest as he was bending down to check the condition of the mayor.

The coroner grabbed at the lollipop, but since it was so sticky, he was unable to pull it out. He looked around unbelievingly and fell to the ground.

“My gracious. Is he dead?” Paul of the Lollipop Guild asked as Munchkin Land fell silent.

“I still feel a pulse,” Harry of the Lollipop Guild said as he went to one knee and grabbed the coroner’s wrist.

The coroner managed to pull himself up and whispered to Harry, “I’m really, most sincerely…dead.” At this point, he dropped to the ground and lay still.

Jerry slunk into a corner and started to cry. Paul went over to comfort him, but Harry pulled him aside. “Best leave him to his thoughts. Munchkicide isn’t something he’s likely to get over anytime soon.”

With the death of the mayor and the coroner, all of Munchkin Land looked at Paul and Harry.

“I guess you’re in charge now, honey. What do we do?’ Paul asked.

Harry of the Lollipop Guild put his hands on Paul of the Lollipop Guild’s shoulders. “No, Paul. You must lead them. I have another destiny. I know it pains you, but we have to assume Dorothy…is dead. We know the Wizard has left Oz. As for Glinda, she’s never really around when you need her.”

Tears welled in Paul’s eyes. “But what are you going to do?”

Harry backed away from Paul to speak to all the Munchkins. “I’m going out there my friends. I’m going to try to find the Wicked Witch of the West. I know the odds are against me, But I’ve got to try. And even if you don’t see me, remember I’ll be around. Whenever there’s a witch not letting us get apples from a talking tree, I’ll be there. Whenever there’s a flying monkey beating up one of the lullaby league, I’ll be there too. And if Munchkin Land ever comes back from this…Don’t forget to look for me…cause I’ll be there too. I bid you...farewell.”

Harry of the Lollipop Guild turned and began his journey down the yellow brick road.

The munchkins joined hands and hummed Red River Valley until he was completely out of sight.

END
Posted by 1001: A Film Odyssey is produced, directed and written by Chris, a librarian. at 1:28 PM