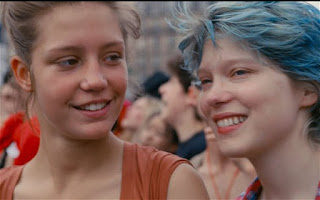 While I was watching Blue is the Warmest Color, someone called me and ask me what I was doing. I said "I'm watching underage lesbian French porn...and what are you doing?" I know that's unfair, because this is really a pretty good coming of age film, where we do get to know and care about the main character of Adele and her artist friend girl-friend Emma. The NC-17 rating is for the sex scenes that are graphic and much longer in length than I can imagine them ever being presented in an American film.

Posted by 1001: A Film Odyssey is produced, directed and written by Chris, a librarian. at 5:42 AM