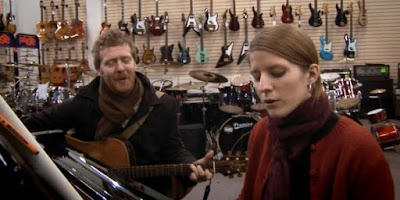 Once is a bit of a hard movie to categorize. It's not a musical, but it has a lot of music in it. I even own a copy of the soundtrack! It's not really a romance between the two leads, though that issue does surface...a little. It doesn't really have a lot of conflict in it, either. The main characters are just trying to get a studio to record some demos! But the guy they are renting the studio from is going to be a problem, right? Well, he is for about a minute until he likes his music and then plays frisbee with the guys and girl. What about the guys dad? He won't understand his son going off and becoming a musician, right? Except he only turns out to be the most understanding dad in the world!

No romance. Not a musical. Not much conflict. Hard to define.

I just know I like this simple story and have seen it three times.  Certainly in my hypothetical 1001 book.
Posted by 1001: A Film Odyssey is produced, directed and written by Chris, a librarian. at 5:44 AM