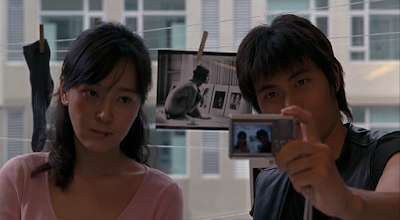 "Seen anything good you want to recommend?"

I get that question at the library a lot. I'm not sure I'd give 3-Iron as an answer to this question simply because I'd have to try to answer the next question as to what it was about. But there was one time I did try to promote this offbeat film when I got the "have you seen anything good you want to recommend" question...

"Well, I just saw this movie. It's called 3-Iron. It's Korean. It's about this young guy on a motorbike that goes from house to house to just to sort of hang out and just be. He doesn't steal or cause much damage usually, and he doesn't say anything...In fact, he doesn't say anything for the entire movie! He has a girl that hangs out with him eventually after he beats up her boyfriend by hitting him with a bunch of golf balls. Oh, they do break into one guy's house and it turns out he is dead and they give him a nice burial. The young guy eventually goes to jail for his golf ball assault but escapes and sort of reunites with the girl...at least I think that's what happens, I'm not really sure."

At this point the library patron nodded politely and asked me if we had a copy of the newest Fast and Furious movie. I gave him the video he asked for at knowing that I at least tried.
Posted by 1001: A Film Odyssey is produced, directed and written by Chris, a librarian. at 10:17 AM