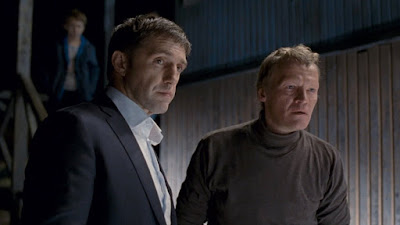 When I was choosing films to show for our foreign film series at the library last year, I chose Leviathan strictly because of the favorable reviews it had gotten. Of course, this film about the difficulties a Russian mechanic experiences with his small home town and local politicians isn't exactly a "feel good" film. After the crowd left our theater, I did get a few people tell me that I might want to choose something a little more upbeat next time. I guess that's probably a microcosm of what movie studios in general go through. People don't always (or even usually) want to see a downer.

I missed a little bit of the middle portion of the film when I showed it, but took it home and watched the whole thing again. It really is a well done procedural of this man's life and the Joblike downward spiral that is largely out of his control.

Downer or not, this one is in my book.

Posted by 1001: A Film Odyssey is produced, directed and written by Chris, a librarian. at 9:51 AM