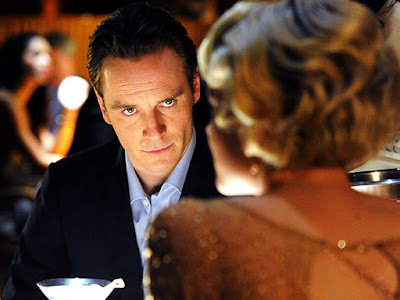 Shame is a character study about a New York executive played by Michael Fassbinder who also happens to be a sex addict. And not just someone with a strong sex drive, someone who is addicted to the sexual high. Despite this, he still has to function at his job, as well as his deal with his tenuous relationship with his flighty sister, played by Carey Mulligan. It's a fascinating story, with strong performances by its two leads. Roger Ebert had an interesting take on this film when he called it "a great act of filmmaking and acting. I don't believe I would be able to see it twice." I concur.

What's in a Name: This is the second film from the 1001 list to have Shame for a title. The 1967 Ingmar Bergman film being the other. It's too bad the 1962 American International Roger Corman cult film about racism that also shared this title didn't ever make the book to complete the Shame trilogy.

Sing me a song: Is it in Carey Mulligan's contract that she has to do a song in every movie she's in? Inside Llewyn Davis, Far from the Madding Crowd and Shame-all from movies I've seen recently. I'm not complaining, she has a nice voice.
Posted by 1001: A Film Odyssey is produced, directed and written by Chris, a librarian. at 4:12 AM