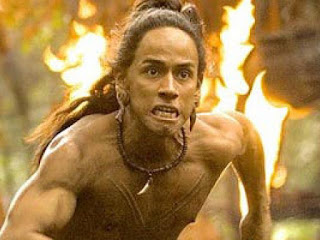 You got to give Mel Gibson some credit, he does make an exciting adventure film here about a culture we don't often see depicted in American films (except maybe in reference to the white man coming) and using the Mayan language no less! I do admit all the booby traps set by the hero of the film to thwart his pursuers did make me think we were seeing a more deadly and Mayan version of Home Alone, but there you have it.
Posted by 1001: A Film Odyssey is produced, directed and written by Chris, a librarian. at 7:32 PM