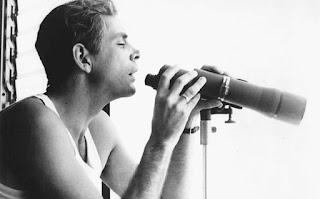 Sergio Corrieri is the observer in
Memories of Underdevelopment

One thing that really gets me mad about people is how they can't seem to sustain an idea or a feeling. Elena proved to be totally consistent. She doesn't connect things. That's a sign of  underdevelopment.

Legendary Cuban director Tomás Gutiérrez Alea's 1968 film is set between the Bay of Pigs Invasion in 1961 and the Cuban Missile Crisis in 1962. The film intersperses documentary footage of the era and the revolution around a story of a playboy named Sergio who tries to cope with the change of his status and of his surroundings.

The film doesn't lend itself to any obvious plot points. One of the main storylines features Sergio's involvement with a teenager named Elena, who he promises to marry and proceeds to get in trouble with her family when he backs out of it. But this film is more about coping, observation and changes in ways that are less obvious. Sergio was part of the upper class and this film traces how he is going against the tide (literally in one scene) of his society after the revolution. A film with many new wave qualities that is worth seeing and studying.

The Criterion Collection put out a Blu-Ray/DVD disc of Memories of Underdevelopment in August, 2018. The second disc includes interviews with actress Daisy Granados and an old audio interview with director Alea. A documentary on the life and career of Alea is also included. We also hear from original novelist and screenwriter Edmondo Desnoes, who liked some of the changes that he and Alea made for the film from his novel so much that he went back and re-did his book and incorporated the changes! 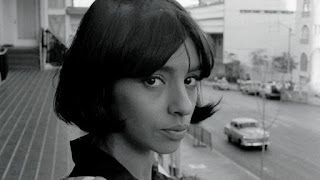 Daisy Granados as Elena, one of the objects of Sergio's affection
in Memories of the Underdevelopment
Posted by 1001: A Film Odyssey is produced, directed and written by Chris, a librarian. at 11:58 AM