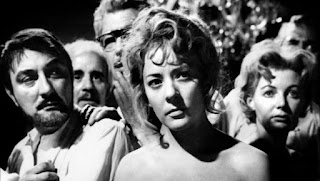 The trapped houseguests plan a revolt against...themselves?
in The Exterminating Angel

I've enjoyed going through the Luis Bunuel films on the 1001 list. Going in blind, you just never know what to expect when you see his name in the opening credits. The Exterminating Angel was his follow-up to Viridiana, which was a rather straightforward narrative (for Bunuel) though chock full of symbolism. With The Exterminating Angel, Bunuel lets his surrealism flag fly high.

The Exterminating Angel opens at an opulent home where a elaborate dinner party is being held for twenty or so people. Problems arise when many of the servants and cooks want to leave the home before the party begins. During the serving of the food, one of the servers falls down while holding a plate of food. Everyone laughs inappropriately and you've just entered the Bunuel Zone.

After dinner, everyone sits around and talks, drinks and listens to one of the guests playing the piano. The party is over and everyone is about to go home. But they can't leave the house! "Why can't they leave the house?," the logical part of your brain may ask. The spoiler answer is "Who the hell knows?"

The guests have to spend the night. They have breakfast and...they still can't leave. They complain to each other. They begin to fight with each other. They blame each other. More of their dark sides come out. They stay in the house for a long time. Days? Weeks? They run out of food. Luckily, there are sheep and a bear in the house! I guess that's lucky? There is also a disembodied hand moving along the floor of the house.

We get occasional glimpses of the outside. The military knows they are in there and nothing is stopping them from coming in and performing a rescue, but they can't manage to go in after them. No need to ask why.

After an unspecified period of time, one of the guests notices they are sitting in the same position the first night they were in the house. They recreate the scene and are now able to leave the house.

The epilogue shows the same party guests now in church. After the sermon they all go to the door. They can't leave. Luckily the sheep can roam freely and the military seems to be out in force in the streets.

What you get out of The Exterminating Angel is probably up to you. I'm struck by the fact that the workers had insight to leave the house while the rich did not. Is this a class issue? Could the whole movie be a comment that we are trapped in our world with our own self made prisons? The fact that the movie ends with the group being trapped in a church (One of Bunuel's favorite targets) might add some credence to this theory.

And what about the sheep? Are they just lambs to the slaughter? Or will the meek indeed inherit the earth? What about the disembodied hand? I think that's just Bunuel just screwing with us. Of course, you might say that for the whole film in general. It's hard to say when you see a film like this to answer questions like "Did you enjoy it?" "Was it good?" Let's just say that I appreciated the experience (I watched it twice) and am looking forward to seeing more Bunuel, though I know what to expect from him even less than I did before I watched this film. 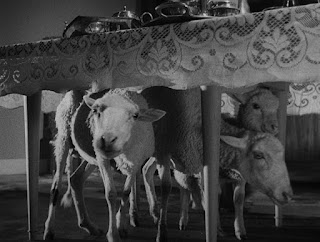 "Don't ask us why we are here. Make up your on mind!"
The sheep in The Exterminating Angel 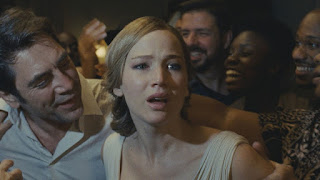 Why won't these people leave my damn house?
Jenifer Lawrence in Mother!

The 1001 updated list for 2018 came out recently. One of the movies on the list was Mother! All I knew about this film was that it elicited very strong opinions...many of them negative. But it did make the 1001 list and despite the fact that it is directed by Darren Aronofsky, it couldn't possibly be an odder viewing experience than The Exterminating Angel. Could it?

The plot: (Mother) Jennifer Lawrence and (Him) Javier Bardem are a married couple living in a isolated house. The first scene has Mother wondering where Him is. He is a once famous writer trying to get his muse back. She's a resourceful spouse who has spent much of her time refurnishing and renovating the house. Their isolation is interrupted by a man (Ed Harris) who is a fan of Him who comes to their house and later brings his wife (Michelle Pfieffer). They are different degrees and intrusive and obnoxious and even break Him's precious crystal object. The man and wife leave only to return with their sons who fight over the dying man's will and the older brother kills the younger one.

A funeral wake is held at the house to the chagrin of Mother as the guests prove to not respect the house at all and cause a lot of damage. Mother finally kicks them all out. Mother and Him finally manage to have sex and conceive. Him's Writers Block ends and he finishes his book that Mother loves, his publisher loves and the public loves. All these things appear to happen at the same time.

Mother plans a celebratory dinner with Him, but is interrupted by several adoring fans of Him that intrude upon their house and trash the place as many try to take away anything owned by Him as a souvenir.

All going on in the house gets out of hand. The military arrives to restore order. It becomes like a third world coup complete with executions. Mother escapes to the attic and has her baby. Him takes the baby from her when she is asleep and passes it around to the fans. The baby is torn apart and eaten by the fans. An enraged mother lashes out at the fans with shards of glass. The fans strike back at mother only to be saved by Him. Mother blows up the place. Him finds a dying Mother and removes a new precious crystal object from her chest.  The last scene shows a new Mother wondering where Him is.

Wow! Just wow! That's a lot to take in! The whole Genesis biblical allegory is clear (I admit it took me awhile to pick up on it). There are many times I was watching this that I was confused, but when I let my mind relax and float downstream, I began to appreciate it greatly. It's not a traditional film in the least, other than having some noted actors in it. On the one hand, I understand people flipping out over it and even ridiculing it (The Philistines!). Personally, I found it a riveting viewing experience that I can't seem to shake (Though I think I need to!).

Jennifer Lawrence was nominated for a Razzie, which was very undeserved. I'd have nominated her for an Oscar and maybe would have even voted her to win.

In the extras, Darren Aronfsky talked about directors that influenced him. One of them was Luis Bunuel. I should have figured.

It's not nice to fool Mother!
Posted by 1001: A Film Odyssey is produced, directed and written by Chris, a librarian. at 6:22 AM