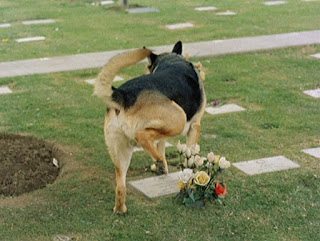 The first film critic weighs in on Mondo Cane

An immensely popular documentary that problematizes the boundaries separating fiction from non-fiction filmmaking practices. Mondo Cane created a subgenre of "mondo films" or "shockumentaries." It also created a wave of imitators and has proved formative for such diverse pop and pseduodocumentary traditions as "mockumentaries," "snuff films," hard core pornography, execution videos and reality television.-Steven J. Schneider, 1001 Movies You Must See Before You Die


------------------------------
My first thought when I hear someone refer to a "Mondo" film is a Russ Meyer sexploitation epic like Mondo Topless. Going by the description above by Steven Schneider, the Mondo films and it's many imitators show many aspects of unusual behavior and not just sexual ones.  One of the first movies I ever rented on my VCR in 1987 was Faces of Death (It wasn't my idea!) which depicted people actually dying of film in various ways. You can't get much more "mondo" than that.

But what about the original Mondo Cane (It's a Dogs Life)? This film goes around the world depicting seemingly endless examples of unusual behavior. We see Americans mourning their dogs at a pet cemetery and trying to get a piece of actor Rossano Brazzi (not at the same time).  We see Malaysian fisherman torturing sharks. We see Nepalese beheading bulls in a very gruesome fashion. We see some underdeveloped countries continuously praying for goods that never seem to come. We see Catholics in Europe rubbing their legs with broken glass. There's also a post atomic scene with a turtle that I don't even want to talk about. And so much more!!!

There has been some criticism of these films that some of it is staged. Maybe so, but it clearly took a lot of work to put this together in any form.

Obviously, films like this are going to elicit a wide range of opinions, but it is in the 1001 book and was on the top ten movies of the year list in the 1962 New York Times. Judge for yourself.-C. Cox, 1001: A Film Odyssey 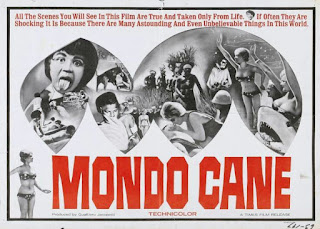 Original poster art for Mondo Cane
Posted by 1001: A Film Odyssey is produced, directed and written by Chris, a librarian. at 3:19 AM