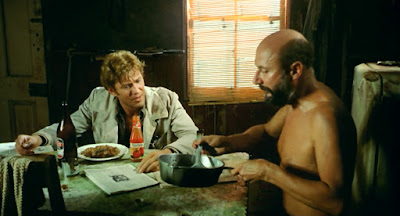 I admit that the only thing I knew about Wake in Fright going in was that it was Australian. I was trying to do some horror movies this month and I thought a film called Wake in Fright might work for that...but after watching this for a bit I realized  that this one doesn't  fit into that category the way I thought it would. Not that there isn't a great deal of horrifying images in it (Can you say Kangaroo hunt?). The film is kind of like Deliverance meets Walkabout meets Crocodile Dundee meets Heart of Darkness with maybe a touch of Groundhog Day (In that the protagonist can't escape his situation.)

John Grant (Gary Bond) is a discontented teacher, who while traveling on his way to Sydney for a holiday, makes a pit stop in a small town where he gets involved with some of the locals in most unusual ways. He gets in some back room gambling in which after an initial winning streak, ends up losing all of his money and finds himself now stranded in the town (known as The Yabba).

The films unfolds very slowly and that isn't necessarily a bad thing. I found myself often questioning what it was all about early on, but I kept on plugging, though the movie doesn't play its hand in any obvious way.

During the second part of the film, John gets involved with a group of swaggering hunters. These sporty fellows mostly like to drink, fight, debauch and go out on Kangaroo hunts. He also gets involved with a local woman...or should I say doesn't really get involved as this movie never seems to go in the direction you think it might. John also meets a  sort of doctor (Donald Pleasence) who might be the oddest of all the odd characters he runs into.

Most of the film is about how John changes throughout. His contempt for his surroundings dissipates as the contempt for himself seems to increase. It doesn't look like going down this rabbit hole is going to end well.

It's an odd film and one that does take a little patience. Enter The Yabba at your own risk. G'day. 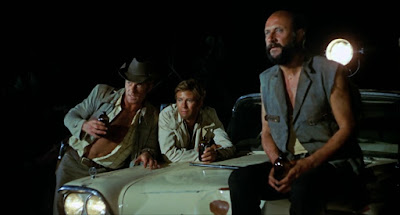 Male bonding before the hunt in Wake in Fright
Posted by 1001: A Film Odyssey is produced, directed and written by Chris, a librarian. at 6:43 AM