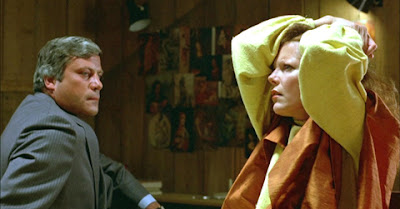 Oliver Reed and Samantha Eggar
talk it out in The Brood

When you watch a David Cronenberg film, you know you are going to get something different. I'm surprised I had never got around to watching The Brood before. It's definitely an early entry in the Cronenberg canon and I had heard a lot about it, but never took the plunge into watching it for some reason. It didn't make the 1001 book, but is well thought of enough to have gotten a recent release from The Criterion Collection.

The plot involves an unusual institute run by a smooth talking con man named Ragland (Oliver Reed) that delves in a form of therapy called plasmatics, which involves a form of psychodrama for the patients there. One patient named Nola Carveth (Samantha Eggar) is holed up there separated from her husband and child. Much of the movie involves her husband Frank (Art Hindle) and his attempt to reach her.

But does he really want to reach her? Who is controlling who at the institute? What secrets are Nola hiding and what power is she unleashing? And the big question, who and what is this brood?

If this is a Cronenberg you haven't seen but like his films, it's one to pick up. The fact that it's low budget and Canadian made sort of adds to its charm. If you can use the word charm when referring to The Brood. In fact, forget I said charm. Let's go with nightmarish and shocking instead.

The Criterion release of The Brood has some interesting extras. One has Art Hindle and Cindy Hinds (who plays the daughter, Candice) reunited and interviewed by a writer from Fangoria magazine. The two of them have fond memories of the film all these years later. A very interesting (but odd) extra has a clip of Oliver Reed on the Merv Griffin show in 1980 with the other guests being Orson Welles and Charro! It's an interesting discussion, though I don't think Reed talks about The Brood during the whole interview!

The brood of The Brood 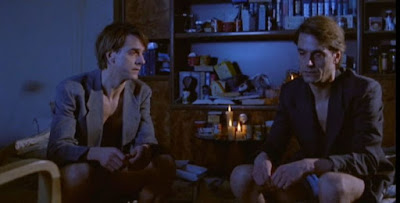 Cronenberg went on to direct some of the most interesting films of the 80's, (Scanners, Videodrome, The Dead Zone, The Fly) culminating the decade with Dead Ringers in 1988. This film has Jeremy Irons playing identical twins who go on to become famous gynecologists, but whose personal demons get the best of both of them.They become involved with an actress (Genveive Bujold), whose trifurcated cervix is an important plot point. It's the only movie I can think of where you can say that a trifurcated cervix is an important plot point.

I saw Dead Ringers when it came out and seeing it again has been most interesting. Jeremy Irons is fantastic in his dual role and Bujold has always been one of my favorites. The technical and medical detail of the film seems authentic enough to me to make some of the revelations of the film that much more disturbing.

One note on the film is that the twins bring up the case of Chang and Eng Bunker, the original Siamese Twins. They discuss the story of Chang and Eng's death in the film as if needing to explain it to the audience. But didn't everyone read about Chag and Eng in The Guinness Book of World Records when they were a kid and already know this story? Maybe that was just me. 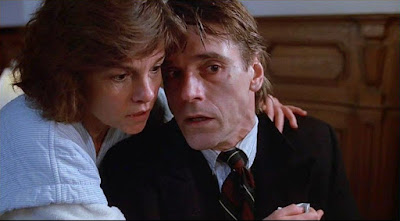 Anyway, I may try to catch up on some more Cronenberg soon. I also have Naked Lunch still on the 1001 menu.

Happy Halloween!
Posted by 1001: A Film Odyssey is produced, directed and written by Chris, a librarian. at 3:06 AM