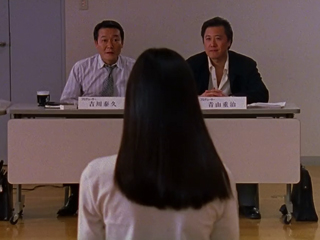 "Cute meet" about to go wrong
in Audition

If I had gone into seeing Audition without knowing the film was labeled under the horror genre, I can only imagine what my reaction to it would have been like.

The film starts out with a man named Aoyama whose wife dies in the first scene, leaving him alone to raise a young son. Cut to several years later when the now teen-aged son encourages his father to get out and meet someone new. Before you can say The Courtship of Eddie's Father, the dad is convinced by a television producer friend to hold a mock audition for a show that is in reality a search for a suitable wife for Aoyama. The film shows several of the beautiful women being interviewed and the comedy here is pretty good.

I'm guessing this is going to be a cute meet chick flick, right?...Well, let's not call Sandra Bullock and Hugh Grant for the remake quite yet.

Aoyama chooses a girl named Asami, who has a very blank past and gives everyone else but Aoyama really bad vibes. As the movie progresses, we get parts of Asami's past that are pretty awful and one thinks this is closer to a female revenge movie. It is to a degree, but the extent to which Yasuhisa conducts her business at the end of the movie was very repellent and hard to sit through. I say that, yet I do admit I had trouble closing my eyes during the finale. This is definitely a film that will stick with you and one I never plan to watch again. 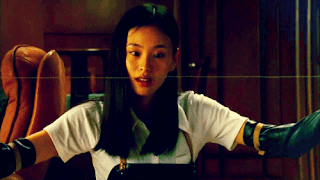 Asami (Eihi Shiina) at the end of her Audition
Posted by 1001: A Film Odyssey is produced, directed and written by Chris, a librarian. at 1:28 AM