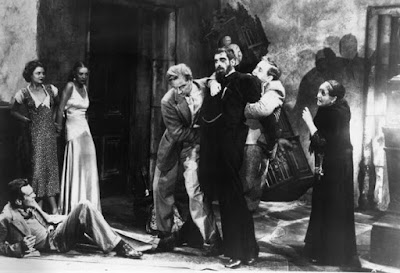 One of Leonard Maltin's 70's Movies on TV books (or was it Steven Schueuer's Movies on TV book?) had something in the foreword that stuck with me. It mentioned two movies that had yet to be on TV (This was from about 1975). One was Gone With the Wind, which did make its TV debut a year later. The other was a less famous (of course, most every film is less famous than Gone With the Wind) 1932 horror film called The Old, Dark House. It seems to have been a question of copyright as well as the original film negative being lost for a time that prevented it from us ever seeing this on the late show during the ensuing years.

It occurred to me all these years later that I have still never seen this film! Well, with YouTube, accessing The Old, Dark House is no longer a problem and it is 72 minutes I'm willing to invest.

The film starts with a couple and their wisecracking friend traveling by car in extremely bad weather when they come across an old...dark house. I'm sure many viewers will have visions of The Rocky Horror Picture Show as they watch some of these early scenes, but these horror movie tropes had to have an originate somewhere! The group is let into the house with grunts by a sinister servant named Morgan (Boris Karloff). They are welcomed with open arms by the man of the house, though less so by his sister. They all have a nice dinner at a large table that seems to feature a lot of potatoes being passed around. (Personally, I don't think I could eat much with Morgan around!). Another stranded pair also come to the house and a place to sleep has to be made for them as well. We know all is not going to go too well pretty soon for all the travelers. The other occupants of the house we later come to see are the 102-year old invalid patriarch and the crazy arsonist uncle who is locked in his room most of the time.

The Old, Dark House is directed by James Whale, just coming off Frankenstein. There may be areas of the film that are a bit clunky and the fight scenes aren't exactly riveting, but Whale really knows how to set the mood and the way the film is shot is appropriate to the subject matter and definitely served as a blueprint for many others in this genre (at least during the Black and White era). The story was adapted from a book by the famous novelist J. B. Priestly.

Another thing that really stands out about this movie is in having such an exceptional cast for a low budget horror movie.Raymond Massey, Melvin Douglas and Charles Laughton could easily head up the cast for an expensive epic, but they all  do fine work here. I especially like Douglas, whose wisecracks remind me of his future role as Garbo's romantic partner in Ninotchka.

This is also probably the most famous movie with Gloria Stuart not titled Titanic. Yes, Gloria Stuart at one time was twenty-two. There is a scene where she is in her slip and I was hoping that she would ask someone to "Paint me like one of your French girls", but that was not to be.

But the most important cast member of The Old, Dark House is undoubtedly Boris Karloff. There apparently was a big mystery about Karoff (billed as only Karloff!) because the open crawl reads:

PRODUCER'S NOTE
Karloff, the mad butler in this production is the same Karloff who created the mechanical monster in Frankenstein. We explain this to settle all disputes in advance, even though such disputes are a tribute to his great versatility.

I love that disclaimer! Karloff has no lines but his menacing presence is felt throughout and does have a scene of poignancy at the end of the film. 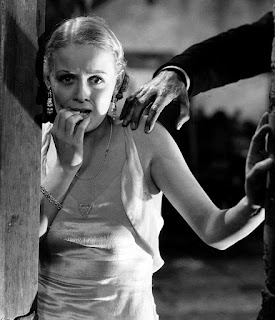 Gloria Stuart is about to feel the
touch of KARLOFF in
The Old, Dark House 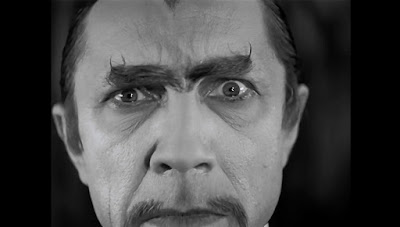 White Zombie came out the year after Bela Lugosi made his big screen splash in Dracula (1931). The plot features a young couple (Madeline and Neil) who come to the West Indies to get married at the behest of a rich plantation owner (Beaumont), who has the ulterior motive of being in love with Madeline and wants her for himself. Beaumont has reluctantly received aide from Legendre, a voodoo master who convinces Beaumont that the only way to win her over is to turn Madeline into a zombie. He does and of course things do not pan out as Beaumont had planned. At Legendre's castle, we see the zombified Madeline, who is now under the control of Legendre and who takes control of Beaumont as well. Neil and his friend Dr. Brunner storm the castle to try to save the day.

One reason to see White Zombie is Bela Lugosi. Bela was never the most versatile of actors, you pretty much know what you're going to get a lot of menacing stares and dialogue that is basically a variation of his Dracula spiel. But I like Lugosi and he does this pretty well, though you do wonder why any character in any of his films would ever trust him in the first place.

White Zombie is also noted as the first feature film to depict zombies. These are Legendre's crew who he stated in life were his enemies, but who now serve him. They even work for him at the sugarcane mill (I'm guessing for less than minimum wage). They carry out his more nefarious assignments as well until Legendre is knocked in the head by Dr. Brunner, causing the now confused zombie crew to walk off the side of the castle to their doom.

The film may not rank in the top of the Universal horror movie canon, though I do like many of the shots employed by director Victor Halperin. I especially like the views of Legendre's castle and the setting is appropriately eerie. Halperin directed another zombie film, Revolt of the Zombies, in 1936.

The supporting cast for Lugosi is not in the same league as the cast for The Old, Dark House,  though my favorite is probably Joseph Cawthorne as Dr. Brunner, the missionary who can never seem to find a match to light his pipe. 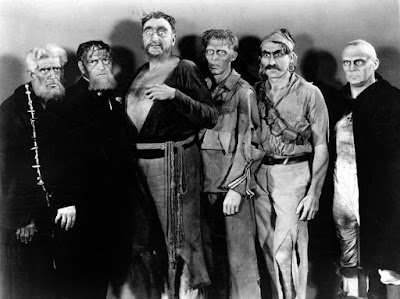 The original zombie garage band
in White Zombie
Posted by 1001: A Film Odyssey is produced, directed and written by Chris, a librarian. at 11:58 PM