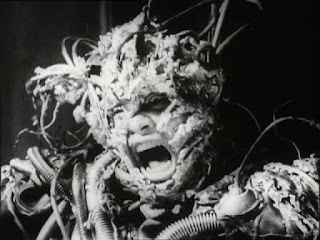 The salary man being taken over in
Tetsuo: The Iron Man

Tetsuo: The Iron Man has been described as sort of a Japanese version of Eraserhead, but more cyberpunk. I think that's as accurate as anything I could think of. The plot involves a metal fetishist and a "salary man"who...I changed my mind-I'm actually not going to recount the plot.  Let's just say I see the whole thing as a metaphor for how technology is taking us over where it not only becomes one with us but ultimately takes charge. That's my story and I'm sticking to it.

I may have liked this more If I had seen it on Night Flight on the USA network the year it first came out, but sometimes you see a movie when you see it. 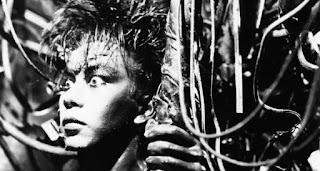 The metal fetishist asserts his authority in
Tetsuo: The Iron Man
Posted by 1001: A Film Odyssey is produced, directed and written by Chris, a librarian. at 6:00 AM