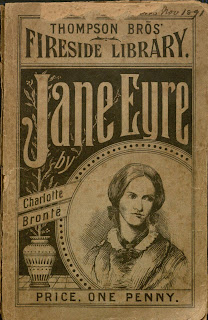 Charlotte Bronte's Jane Eyre (the novel) is written in dense, wordy detailed prose. The narrative is in first person and does seem to divide readers on whether or not they like the style. Personally, I think it is so expertly written that Bronte can get away with going into such excruciating detail. The audiobook version I listened to clocked in at a robust 22 hours!

But how do you make it into a film? The style of a movie is vastly different than a book, maybe more so in this case. For example, you can't, or don't need to describe a person's appearance over and over again in a movie because we can see what they look like!

You also have to decide how to structure the plot.

I break down the plot of the book into these sections:
1) Jane's childhood and her unhappy upbringing from Sarah Reed, her miserable Aunt.
2) Jane's time in Lowood school (mostly at age ten), often under the guidance of the tyrannical Mr. Brocklehurst.
3) Eighteen-year old Jane leaves the school to play governess at Thornfield Hall. The master of the house is Edward Rochester, whose complicated relationship with Jane slowly blossoms into love.
4) But before we get to the love part, Sarah's Aunt is on her death bed and Jane has to leave Thornfield and go tend to her for awhile.
5) After returning to Thornfield, Rochester proposes and the couple declare their love for each other and are about to get married, but...it is exposed that Rochester has a crazy wife who has been living in the attic the whole time!
6) Jane decides she can't stay and wanders on a journey that almost kills her. She winds up in the house of St. John and her sisters. It goes well for awhile, until St. John wants to marry her and take her to India with him on a missionary trip. Jane won't stay under those circumstances and leaves.
7) Jane returns to Thornfield and finds much of the estate damaged by fire. It turns out that Rochester's wife tried to set the house on fire before jumping to her death. There are no other casualties, though Rochester was blinded during the fire. Jane and Rochester reconcile and get married. 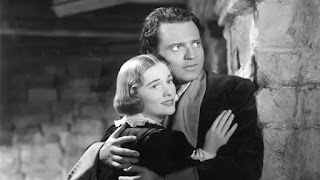 So how does the 1944 version of Jane Eyre (screenplay by Aldous Huxley and John Houseman) run the plot?
Part 1 we have. Jane (Peggy Ann Garner) has to deal with her Aunt (Agnes Moorehead) before being sent off to Lowood.
Part 2 we have. Jane has to deal with the travails of the school, but does have one friend named Helen (a young Elizabeth Taylor) who tragically dies during Jane's stay at the school. Fast forward to Jane at eighteen (now played by Joan Fontaine) and she makes the decision to break away from the school and become a governess.
Part 3 we certainly have. Jane becomes entrenched as the governess of the little French girl at Thornhill. We meet Mrs. Fairfax and of course the complicated Edward Rochester (Orson Welles). This is the main part of the movie and this section ends with the crazy wife and Jane leaving. The difference is we have Part 3 followed by Part 5. We then got to part 4 as Jane only goes to her Aunt's deathbed after the wedding debacle.
After than we go to part 7 and the finale. Section 6 with St. John is eliminated  from the story all together. 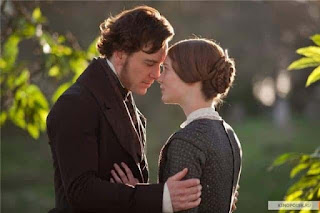 The 2011 version (screenplay by Moira Buffini) actually starts out with Jane's wanderings at the beginning of Part 6! We then go through the movie in flashback starting with Part 1. The rest of the sequences in the movie are pretty faithful to the book, though at under two hours, we do get abbreviated versions.

Both of these versions are in fact under two hours. I haven't watched any other adaptations, but there is a 2005 mini-series (3 hours, 50 minutes), and a 1983 BBC adaptation (4 hours).

And there are plenty of other versions of Jane Eyre out there, including an opera and a Broadway musical! 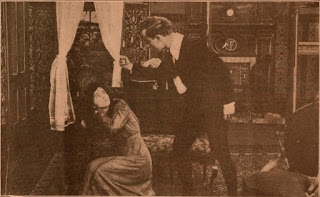 Still from the lost Jane Eyre silent film from 1910
Posted by 1001: A Film Odyssey is produced, directed and written by Chris, a librarian. at 8:49 AM