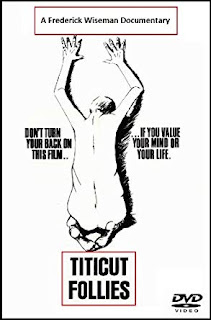 Titicut Follies (1967) is the first of a long list of documentaries from director Frederick Wiseman. Wiseman's most recent film*, Ex Libris is from 2017. His most famous film is probably High School from 1969 and is listed as one of the 1001 Movies You Must See Before You Die.

By my three film sample of the Wiseman catalog, this seems to be his style. (In other words, he is definitely not Michael Moore). Wiseman's method must not make it easy for the filmmaker to put the film together and certainly doesn't make it easy on the viewer. That isn't meant as a criticism, as this can really get the viewer engaged if what is on the screen is compelling. And it is here. Titicut Follies is often sad and as I assume with many of Wiseman's films it doesn't present the institute it is showing in a particularly favorable light. 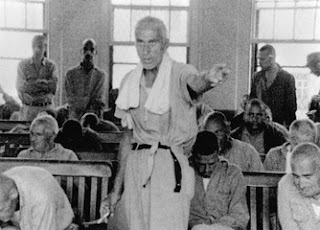 Wiseman's output over the next fifty years, tackle many other institutions, including: hospitals, the police department, the military, the government, among dozens of others. It took him fifty years to finally get to the library. 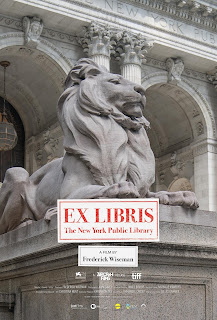 Ex Libris shows us all about the New York Public library. And as I mentioned before, the viewer is not going to be spoon fed the information presented. It might help if you knew who Richard Dawkins and Elvis Costello were beforehand to really appreciate what they are saying at their respective library programs discussing their new books.

We also see a lot of the outreach that librarians do. (You don't just sit around and read books all day?) Serving the needs of the community as diverse as New York City is certainly a great challenge (As it is for most communities).

We see managers in the library trying to get a handle on how to best improve things. We see digitizing...and niche workshops...and making rare artwork available...and students going through the library collection of photos to inspire their own art. We see the library being responsive to needs of the community in general, which I know from experience is a constantly changing thing. We see ideas on how to serve the homeless and other struggling groups. The best action scene in the movie is when the staff checks in books using the NYPL's epic library book sorter!

As a librarian myself, I appreciated and enjoyed a lot of what I saw here. I will say at over three hours, it did seem a little long at times...though I certainly don't want to disparage any movie with a library as a central character. 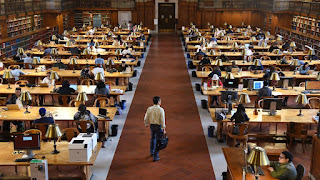 
Most of the films of Frederick Wisman can be accessed on the Kanopy streaming service, which is (drumroll, please) probably available from you local library!

*Additional note, Wiseman actually had a new film released in 2018 about farming. At 89 years old, apparently he isn't slowing down any!