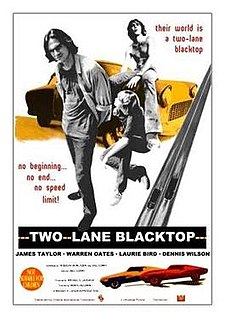 "Two-Lane Blacktop is another transformation of contemporary America into existential parable. The surface story wager auto race across America is casually denied dramatic tension to emphasize the resonance of character and situation."-David Thomson, A Biographical Dictionary of Film

"The people who love this movie (Two-Lane Blacktop) the most-the ones I know include a critic who taped it off of USA Network's old late-night rock-and-movie showcase Night Flight and held on to her decaying VHS copy for years; and a young woman who, while prepping for a solo cross-country road trip, kept the DVD playing on her laptop like background music for a week-all seem to have encountered it by themselves and treat it as their own personal talisman."-Charles Taylor, Opening Wednesday at a Theater or Drive-In Near You: The Shadow Cinema of the 70's

There's just something special about early 70's movies to me. I was a bit too young to see these type of theatrical films in 1971 and 1972, but I heard about them and knew they were there somewhere! They carried adult or what I perceived as adult themes. They also didn't really have to be about anything plotwise to be interesting.

The "plot" of  Monte Hellman's Two-Lane Blacktop is a great example. Two guys challenge another guy to a race. Is it important who wins? No. Do we find out who wins? No. I'm not even sure there really was a race! The fist time I saw it (About ten years ago) I was a bit underwhelmed. This time, I felt a connection with it. The film stars two musicians (James Taylor and Dennis Wilson), an inexperienced leading lady (Laurie Bird) and the always watchable Warren Oates as the guy who wants to race...sort of.

This one isn't for everybody. For a movie about racing, it moves slowly and doesn't really go anywhere. But I really do like the way it goes nowhere. Definitely in my book.

The DVD commentary with Hellman and screenwriter Rudy Wurlitzer is certainly worth a listen. 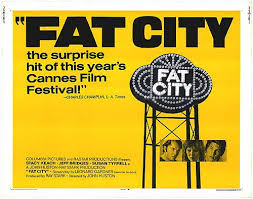 "Fat City shows compassion for both winners and losers, and relates the boxers' fights to the farmworkers' struggle to survive. The vivid details and realistic dialogue of Huston's quietly moving film portray deadbeat characters and drifting characters who fall through the cracks of society."-John Huston: Courage and Art by Jeffrey Meyer, 2011. 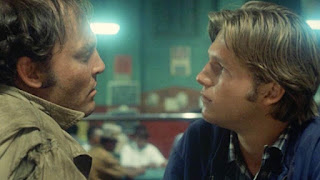 This is my first viewing of John Huston's Fat City. Leonard Gardner wrote the original screenplay and book for this film about an aging fighter named Tully (Stacy Keach) who helps out an up and coming boxer named Munger (Jeff Brdiges). But this is no Rocky-like story of inspiration. It isn't even a Raging Bull-type story of a bigger than life main character. Tully is just a guy who has some problems (unemployment, money and alcohol). I didn't find him particularly unsympathetic or heroic, but did find him real and interesting. His on-again off-again girlfriend Oma (Susan Tyrell) might be the most interesting character in the film.

I really like the final scene in the film that has Tully and Munger drinking coffee and just looking at the people. It doesn't give out any answers and I'm not sure it even asks any questions. It just nicely "is." This one's also in my book. 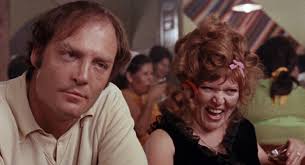 Stacy Keach and Susan Tyrell
in Fat City
Posted by 1001: A Film Odyssey is produced, directed and written by Chris, a librarian. at 5:00 AM