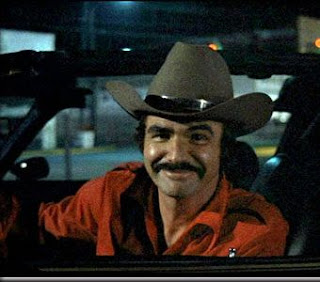 Burt Reynolds in Smokey and the Bandit

Burt had been around a long time in  television roles and B-movies until he hit it big playing the Alpha Male Louis in Deliverance. He specialized in good ole boy roles after that, including White Lightning and W. W. and the Dixie Dance Kings. The role many identify him most may be as The Bandit from Smokey and the Bandit. In this film we have the freewheelin' Bandit, along with his trucker pal Snowman (Jerry Reed), trying to win a bet on whether they can transport a supply of beer across the state lines in twenty-eight hours. He picks up a tag-along runaway bride (Sally Field) along the way and is pursued by the ultimate redneck sheriff (Smokey, played by Jackie Gleason). It' interesting seeing this now, as I haven't seen it since it first came out. It's mostly an excuse for some fast car chases, some fun banter from Burt and Sally, comedic turns from Gleason and some songs from Reed. It's silly fun, and it's hard to imagine the movie without Burt in the center of it. 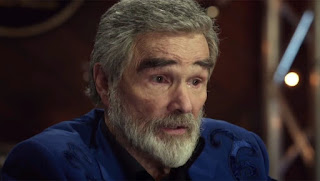 I was listening to a podcast recently that had director Adam Rifkin, who was talking about his movie The Last Movie Star. The plot of the film is about an over-the-hill movie star who get invited to a Nashville film festival, only to find out when he gets there that the festival is a pretty low rent affair.

Rifkin said the only person he wanted for this part was Bert Reynolds. That's easy to see, as the character of Vic Edwards is pretty much just Bert Reynolds with a different name. Some reviews have critized this movie as being a bit predictable in many of its plot contrivances, but I think it works just fine as a coda for the career of Reynolds. It also shows that Bert was always willing to laugh at himself and his seemingly effortless ability to not take himself too seriously was part of his charm There is even a scene in The Last Movie Star where he ends up in the passenger seat of himself in Smokey and the Bandit! What goes around really does comes around if you wait (or live) long enough.

Vic Edwards takes a drive with the Bandit
in The Last Movie Star
Posted by 1001: A Film Odyssey is produced, directed and written by Chris, a librarian. at 4:00 AM