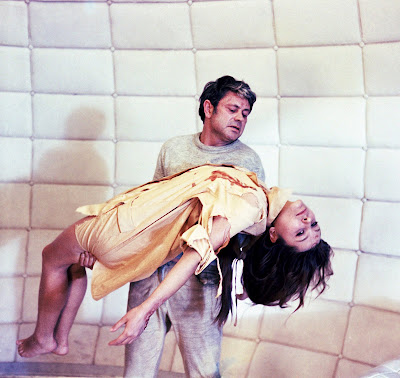 I, Kris, the blog writer continue to wrestle with my thoughts. I simply cannot decide what to write about the 1972 Andrei Tarkovsky Russian Science-Fiction classic Solyaris. I lie down to think further and have strange dreams about linguini and tiramisu throughout the night.

I awaken to find myself crinkling against the cellophane of an unfamiliar mattress. A lithesome figure in a blue negligee shuffles past me. I follow the figure to an adjoining room. Her back is to me as I tap her on the shoulder. She turns to me. The young woman blushes as I eye her with disbelief.
“Ciao,” she says coyly.

“I know you. You’re…you’re Claudia Cardinale! I’d guess about vintage 1969 from about the time of Once Upon a Time in the West,” the blog writer says.

The blog writer sits down in a white plastic chair and Claudia does the same. For the first time he takes in his surroundings. There is a wide telescreen that looks like it hasn’t been viewed in years, a black swivel chair that is shaped like a giant hand, a 1950’s style Radar Range, a small closet with a single neatly hung astronaut suit, a giant globe, a bust of Plato, two glass discoballs, a stained glass widow of what looks like Jethro Tull (the agriculturist-not the band), a well preserved antique copy of Don Quixote, a few flashing bright red, mostly non-functioning computers and several neatly hung fallout shelter warning signs. The walls are covered with white padding, which surround a large porthole, through which I can see seemingly all the stars of the heavens. But the beauty of the heavens can’t compete with the beauty of the creature to my left.

As I lock onto her, I find myself unable to look away. The long dark hair, those catlike eyes and that smile! I felt the need to say something to her. “Your negligee, it’s on backwards,” I manage to get out.

She blushes as she quickly adjusts her outfit the right way.

I, Kris, lean towards her. “We appear to be on a space station of some kind.I guess the big question is why am I hear and why are you here?”

“Does my presence not please you?” she asks.

I turn closer to her. “No, that’s definitely not the problem. You’re appearance here represents my idea of feminine perfection. But you can’t really be here. I think some alien force has created you for my benefit…or my destruction.”

I stand up in a moment of revelation. “I got it! I’m like Captain Kirk in Gamesters of Triskelion. We’re here to provide amusement for our captors.” I shake my fist in the air and yell at the ceiling. “We’re not going to provide you your entertainment! You hear me?” I notice she’s giggling again and I have to laugh myself. “I can’t believe it. I’m presented with a representation of the greatest example of feminity the species has ever produced and within two minutes I make a lame Star Trek reference. What a dork.” I smack my head.

“Don’t do that” she scolds me reaching for my arm. “I think your speech was sweet.”

I go into the room next door and notice it is a washroom. I close the metal door behind me. I splash water on my face and look in the mirror, trying to get a grip on what is happening. I hear a crash behind me and I notice Claudia has smashed her way through the door and is lying on the floor in a heap.

“I thought you were leaving me, mio amore,” she says as I pick up her body and take her to the bed to administer first aid to her wounds.

By the time I get a damp cloth to what appeared to be serious lacerations on her arms, I notice she is practically healed. In another couple of minutes, she is laughing as she is brushing herself off.

I start to speak to her when I notice a midget scurry through the room and out the side door.
“Did you see that?” I ask.

“And in the corner of the room. It’s raining! We’re inside a space station and it’s raining!”

I start to respond, but can only shrug in response as I turn back to her.

I still can’t compute the logic of the situation. The Claudia Cardinale of 1968 (I still think it’s the 1969 Claudia no matter what she says) can no longer exist. How could this be real?

Apparently sensing my quandry, she takes me by the hand and tells me to close my eyes. I begin to question her, but she shakes a finger at me and tells me once again to close my eyes and imagine. I begin to relax. Images begin flowing freely through my head. It is dark, yet I can see. I see stripes..on the middle of a road. And then I see… Claudia and I are driving. Driving through tunnels. She’s still holding my hand.

“It’s the city of the future.”

“So, is this a fantasy within a dream within a work of fiction and why are we in black and white?”

“Stop analyzing everything. Your’re cruising through tunnels with 1968 Claudia Cardinale. Just enjoy it.”

After about a minute I ask her how long the trip is going to last. She tells me a few more minutes and I smile and take her advice and enjoy the ride. I still think it’s odd that it’s in black and white, but take her advice to not analyze the situation further.

Five minutes and thirty-seven seconds later, we reappear on the space station and I tell her how much I enjoyed our trip to the future. The fact that the tunnels did not seem to be in any way futuristic was of no importance to me.

She flashes her million dollar smile and asks me what I would like to do now.
I snap my fingers. “I know. You can help me with my critque of the movie Solyaris.”

“Suit yourself. What have you got?” she says.

“Here’s what I have so far. Tell me what you think.” I clear my throat as I pull out my notebook from my back pocket.
“Solaris (the book) by Stanislaw Lem is a generally acknowledged Sci-fi classic. The English translation from the Polish that is generally read is by Kilmartin/Cox was disliked by Lem. The first cinematic film adaptation of Solyaris is also generally acknowledged as a classic of art house cinema is Andrei Tarkovsky’s 1972 film. Lem didn’t like this either. He thought it emphasized the relationships between Kelvin & Hari, Rheya in the book, over the more technological aspects of the film. Solyaris (the Russian film) was often called the Russian 2001: A Space Odyssey (which I agree with), though apparently Tarkovosky didn’t like that film and thought it emphasized technology over human relationships. How about the Stephen Soderberg version of Solaris with George Clooney? Lem didn’t like that one either for the same reason. I’m guessing Tarkovsky wouldn’t have liked it either if he had lived to see it. What do you think so far, Claudia? Claudia?”

As I look up from my paper, I notice Claudia lying on the ground unconscious with an empty bottle of liquid oxygen in her hand. 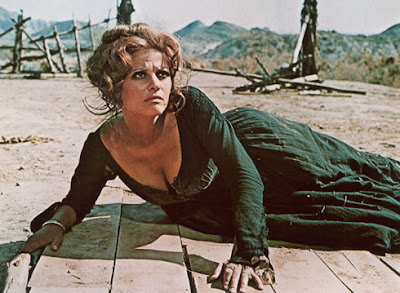