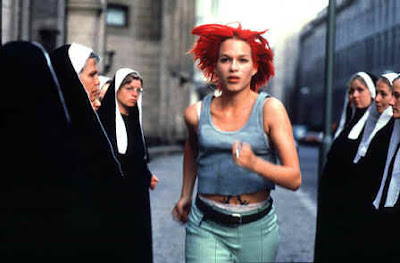 June 18, 1999. Chris has just seen Run, Lola, Run at the Midtown Art Cinema in Atlanta and is about to enjoy a cheesesteak at Woody’s on Monroe Drive with his friend, Eric. Chris currently has no girlfriend.

Eric: What did you think?

Chris: (after quickly swallowing a bite of cheesesteak) I’m still excited. What a great movie! Timing is everything in life. It’s a loose thread we hang by. I don’t think I’ve ever seen a movie that captures that thought so well.

Eric: Didn’t they cover the same territory in Groundhog’s Day?

Chris: Oh, please. This was miles ahead of Groundhog’s Day. Let’s face it. The German mind is just more creative that ours. The roots of their oppression coming out of the war have enabled them to have a creative flow that we fat, bloated Americans can’t relate to. It’s like the gospel tradition tracing its musical roots back to slavery. We privileged white boys can’t relate to this when our biggest problem is…

Eric: All I know is there isn’t enough cheese on this cheesesteak.

Chris: When our biggest problem is not having enough cheese on our cheesesteak.

Eric: That girl in the movie, though. Now, that’s my type. Young, kind of wild, cute in that kind of way…You know the kind of exotic way of European chicks?

Eric: Anyway, what was the deal when she screamed loud enough to break the glass?

Chris: That was an homage to The Tin Drum. You know about Oskar the boy who wouldn’t grow up?

Eric: I never saw that one. I thought it was distracting when it switched to animation.

Chris: Try to tap a little into your artistic sense, Eric. The cartoon interludes wouldn’t have been as effective if they had been done with live actors. And those opening credits. “We’ve got a ball and 60 minutes…the rest is unknown.” Loved it.

Eric: (Pointing to a homeless man passed out at a nearby table) Hey, check out that guy over there.

Chris: Oh, that’s Mike, affectionately known as "The Mayor of Monroe Drive." They’ll shoo him out in a minute.

Eric: Anyway, I liked the music. Kept you on the edge of your seat.

Chris: The music was great. Reminded me of Miami Vice at its best.

Chris: I know. I know. It's your favorite show. I know! (Chris and Eric begin pounding their fingers as drums, imitating the pulsing musical rhythms of Miami Vice before Mike lifts his head and gives them an annoyed look.)

Chris: (Stopping the beating with his fingers to use them to point at Eric.) Oh, and the split screen technique they used. That would be a cliché in lesser hands than Mr. Tykwer.

Eric: Who is Tykwer?

Chris: The director, Tom Tykwer and…boy that food didn’t set too well with me.

(Chris begins to hold onto his stomach.)

Eric: Hey! Are you okay?

June 18, 1999. Chris has just seen Run, Lola, Run at the Midtown Art Cinema in Atlanta and is about to enjoy a cheesesteak at Woody’s on Monroe Drive with his fiancée. Chris has been engaged for a week.

Chris: Well, what did you think, baby?

Chris’s fiancée: (Grabbing Chris’s hand) I think that will always be our first movie we’ve seen together since we’ve been engaged.

Chris: And I love you too. But what did you think?

Chris’s Fiancée: Well, it was pretty exciting in places, but I like a more traditional story. Don’t you, honey?

Chris: No…I mean yes. I’m just happy to see anything with you.

Chris’s Fiancée: Oh, you’re so sweet. (She takes a big bite of her sandwich)

Chris: I do love a girl who appreciates good cheesesteak.

Chris’s Fiancée: I’m starving for food…but not for love.

Chris: And love you I do.

Chris’s Fiancée: Even more than that pretty girl in the movie?

Chris: Yes, even more than the pretty girl in the movie.

Chris’s Fiancée: Maybe I’ll die my hair orange. Do you think that’s a good look for me?

Chris: Maybe…I mean no. You’re perfect exactly as you are.

Chris’s Fiancée: Oh, you know just what to say. But if we hadn't met, do you think you'd be saying I love you to someone else? Like they asked each other in the movie.

Chris: I missed most of that scene when I was in line at the concession getting you that giant tub of popcorn. But no, of course I wouldn't be.

Chris's Fiancée: Oh, you are such an angel. (Now whispering) Oh my, do you see that man passed out on the table over there?

Chris’s Fiancée: That’s so sad. He probably had a love in his life just like you and I do and look at him now. He looks a little like the homeless man in the movie.

Chris: I guess. I missed some of that scene when I was in line at the concession getting you that giant box of Raisinets.

Chris’s Fiancée: Oh, I’m sorry that I made you miss part of the movie. If I had know the movie wasn’t even an hour and a half long, I certainly wouldn’t have made you get up so often.

Chris: Everything for you, my darling, is a labor of love.

Chris’s Fiancée: (Grabbing Chris’s hand once again) There you go again being so doggone sweet.

(Chris begins to hold onto his stomach.)

Chris: I guess that food didn't set too well with me.

Chris’s Fiancée: Honey? Honey Bunny? Are you all right?

June 18, 1999. Chris has just seen Run, Lola, Run at the Midtown Art Cinema in Atlanta and is about to have a cheesesteak at Woody’s on Monroe drive with Mike, a homeless man, better known as “The Mayor of Monroe Drive.” Chris’s final divorce papers came in earlier that day.

Chris: Hey, Mike. Here you go. Have part of my cheesesteak. I can’t eat it all. I filled up too much on Budweiser.

(Mike nods his head in thanks before beginning to chow down)

Chris: (Grabbing his chest) You know, Mike I just saw this movie. German. Run, Lola, Run. Thought it was crap. Derivative. Kind of like Groundhog’s Day, just not funny. And what good would Groundhog’s Day be if it weren’t funny?

Chris: And that music! Sounded like leftovers from Miami Vice for God’s sake. Well, you know how those Germans are don’t you Mike? Regimented. Disciplined. You really think all that there Nazi blood can be completely diluted after just a couple of generations?

Chris: All right. All right. Maybe I’m off base there. Oh, yeah. Those parts where the girl screamed and broke glass. Can you believe it? Just like in The Tin Drum. It’s like they said “why don’t we blatantly ripoff a good movie and put it in our own bullshit movie?”

(Mike ignores the question and takes the final bite of his portion of The Philly Cheesesteak.)

Chris: And all that split screen. Wasn’t that something right out of Bewitched? You know when Samantha talked to her cousin? Well, it wasn’t exactly like that in the movie. But it’s what it made me think of. Come on, now. Why are you interrogating me, Mike?

Chris: And that girl. Pretty, I guess. But those are the worst kind, Mike. They suck you in like a vacuum cleaner and spit you out when your bones are nothing but marrow. At least a robber might knock you over the head, take your money and go away. But a woman. A woman will remove a part of you like a jigsaw puzzle…Wait, that’s not quite right. A woman will dissect you alive, one layer of skin at a time. (Chris begins to hold onto his stomach.) Boy, that food didn’t set too well with me. No…Stop….I don’t want to leave.

Mike stares at Chris who is passed out on the table.
Mike pokes him a couple of times.
Chris grunts.
Mike shrugs.
Mike finishes Chris’s portion of the cheesesteak.
Posted by 1001: A Film Odyssey is produced, directed and written by Chris, a librarian. at 9:55 PM