Once upon a time in a New England wood...

Baseball star Johnny Damon is propped up on top of a giant rock. His hands are tied behind his back and is close to unconsciousness. A splash of water onto his face causes him to awaken quickly.

DAMON: (Becoming alert) What? What? Who are you? What’s going on? Why am I tied up?

ALDO: (holds up his hand as a sign for Damon to stop talking) Please, Private Damon. You inquiries will be shortly addressed. But first let me introduce myself. I am Aldo the Apache and I render justice to those that perpetrate offenses outside the jurisdiction of the American legal system.

DAMON: This is outrageous! You can't do this to me. Let me go at once-

Aldo throws another bucket of water into Damon’s face.

ALDO: Please Private Damon. I was still talking. I will kindly ask you to not interrupt me again. However, since you appear to be the impatient type, I will get right to business by giving you a quick recap of what led us to the predicament you find yourself in. If you recall, you were a member of the grandest organization in sports, The Boston Red Sox. During the 2004 postseason you became quite a hero. I certainly thought of you as a hero. Many others did too. You could have been set for life as a member of the Red Sox. But do you know what you did after that?

Aldo throws yet another bucket of water into Damon’s face.

ALDO: I will now tell you what happened. The devil tempted you and you put your name on the dotted line to be one of his foot soldiers. Yes, you signed with the New York Yankees.

DAMON: Oh, my God! Are you going to kill me?

ALDO: Kill you? You really wound me, Private Damon. Though you may find my accent to be one you might associate with the Smokey Mountains of Tennessee, let me assure you that I am a gentleman of New England through and through. I am not some common Brooklyn street thug. No, grievous as your offense is, it does not constitute a capital punishment. Though that which you have perpetrated does require justice of some kind.

DAMON: But this isn’t fair! I don’t even play for the Yankees any more!

ALDO: I’m sorry, Private Damon. When you are accepted as a Hatfield, you just don’t start hanging out with the McCoys. I’m paraphrasing the honorable Curt Schilling, of course. You took Yankee money when you could have gotten plenty elsewhere. Do you think you’d be in this situation if you had signed with the Milwaukee Brewers? Besides, you can take off that Yankee uniform you once wore, but the Apache in me can still can smell it on you. But not everyone has my nose for truth, but I’ll get to that momentarily. As I said, this is not a capital crime, but to forgo any punishment at all? This, I cannot abide. You need to learn that actions have consequences, though I think your punishment should be a little more than me just making you eat a straw hat.

Damon begins to say something, but Aldo again raises a hand for him to stop. Aldo turns into the direction behind him.

ADLO: (Shouting) Cpl. Yastrzemski! Private Damon here once said he wanted to be a Yankee for life. Oh-blige him!

There are several thumps from a dark tunnel behind Aldo before the figure of a strapping Polish man with smart, dark sideburns and a Red Sox baseball cap emerges outside. He comes into the light twirling his bat like a baton.

YASTRZEMSKI: Yahoo! I’m Teddy Williams and I’m about to go the other way and belt one over the historic Green Monster. And the crowd here at Fenway goes wild!

As Yastrzemski comes next them, Aldo smirks and Yastrzemski reluctantly puts the bat down. Aldo reaches into his pocket and tosses him an all-purpose Swiss Army knife. He nods in Damon’s direction and Yastrzemski quickly takes the knife to Damon’s forehead and goes to work.

ALDO: (looking at Damon) My God, Cpl. Yastrzemski! You do mighty impressive work. Looks just like the emblem on their cap! This is much better than the one you did on Reggie Jackson. Anyway, he’s still out, but you can go ahead and cut him loose now. It looks like the bleeding has stopped and we need to get a move on before he wakes up.

YASTRZEMSKI: Did he really think we were going to kill him?

ALDO: That’s the mentality, Cpl. Yastrzemski. That’s the mentality. As always, I thank you for your good work here today, but it is once again time for us to part our ways as some in our society still don't recognize our way of administiring justice.

Yastrzemski shakes Aldo’s hand and begins walking away from Aldo.

ALDO: (Shouting back) Oh, Cpl. Yastrzemski. Let's remember to keep our knives sharp, I hear A-Rawd might be retiring soon. 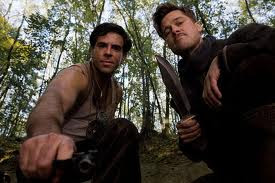