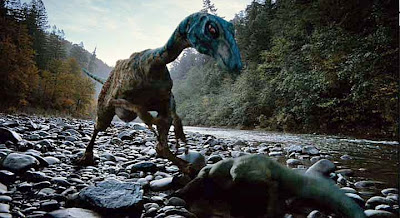 (Rod and Chip Go To the Movies 6: Rod vs. Chip! The Final Battle! Armageddon! Night of the Living Dead!)

Sometime during the 21st Century

Mobile’s Crescent Theater had become about the only place Chip would go see a movie these days. Located in the middle of downtown Mobile, Alabama, the theater’s intimate and cozy atmosphere reminded him of some of those theaters he went to in Atlanta during the early 80’s. The Silver Screen…The Rhodes …those were the days. Days long ago, but days he always thought about whenever he went to the Crescent and watched whatever film was playing and always with a Anchor Steam bought from the lobby. At the front of the theater there were eight plush leisure chairs, but you had to get there early to claim one of them. Yeah, this was it, all right. Plopped down in a leisure chair with your Anchor Steam at the front of the Crescent watching whatever was on the screen. Setting mattered more than the specific movie that was playing for Chip these days.

Playing tonight was the Terrence Malick film, The Tree of Life. The film was unconventional in its narrative and Chip wasn’t sure if his wife, Dana would like it. The crowd was sparse, but enthusiastic. An interesting assortment of educated upper middle class middle age types and young college age intellectuals would certainly be filling the seats shortly. The setting was just like the old days in those theaters of old…Almost… Well, not really. But it was pleasant. After getting his Ales, Chip noticed the break that he and Dana were one of the first in the theater. He scooted her up to the front and sat down on the second leisure chair on the end. Chip pointed for Dana to claim the leisure chair next to him, but Dana hesitated.

“What’s wrong? You’ve got to get these seats while you can,” Chip said.

Dana looked a little squeamish for some reason. “Not yet. I’m going to see if I can get some popcorn,” she said.

Chip was a little annoyed at this, but signaled for her to go. Chip’s unspoken law of the Crescent was to grab the comfortable seat whenever it was open because you wouldn’t get a second chance.

After Dana went out front, Chip was surprised that no one asked him if the seat was taken. He was going to guard it for her, but the lack of interest as the back rows of the theater began to fill up was surprising to him. He took a sip from his drink as he tossed the coat he had been holding on his lap onto the empty seat.

“Hey, watch it!” A voice from the seat came at him.

Chip did a spit take as he spun his head to his left.

Chip couldn’t believe who was sitting in the chair next to him! It was his old friend, Rod!

All Chip could do was stare. It was Rod all right. The person that had sat to the left of him at hundreds of movies in the past was next to him again. But how could this be?

“Hey, don’t waste your Ale, old man. Does my presence here really startle you that much?” Rod asked.

Chip stammered before finally finding the resolve to speak coherently. “How are you here? Now? In this theater? In this town?”

“Calm down. Let’s just say that I got a special theater pass to come tonight. What was the last movie we went to together? Schindler’s List, wasn’t it? That was many moons ago. Of course, I’ve seen you at a few movies since, though I know you haven’t been able to see me.”

“This is unbelievable. Are you telling me that you’re-“

Rod interrupted him, “Let’s just say that the plane on which I reside is not something you can totally understand at this time.”

Chip took a deep breath. “Oh, man! It’s...just...crazy to see you in this form...but I admit I'm really glad you're here! Can anyone else here see you?”

“Unlikely. Too bad they aren’t showing Harvey, eh? I could be your imaginary bunny friend. Let me get to the point since my pass is only good for a limited time. I know you are married. You have a couple of daughters now. You love them, but they give you hell sometimes. You have steady employment, which shows how people can change, eh? Oh, and you came here tonight because you wanted to see this with your wife because you thought she wouldn’t get it and you could pose as her intellectual superior to feel better about yourself.”

“Rod, I thought you majored in Anthropology, not Psychology.”

Rod lifted a finger. “I’m not finished. You came here to this same theater two nights ago and watched the same film with your…ahem, mistress so you could feel intellectually superior to her as well. You’ve become one insecure individual, my friend.”

Chip shook his head. “You’ve been keeping tabs on me. And you’re judging me. Geesh! This whole thing is mind blowing. I’m thinking back to that time you saw Frank’n’Furter in that theater. You remember? You clearly saw him in your mind, but I couldn’t>”

“Of course, I remember. Frank may have been here tonight, actually. I doubt you’d have been able to see him. Don’t ask me why. It’s difficult to explain. And don’t think I’m judging you by calling you insecure. You have to live your own life. Well, unfortunately my ticket is just about to expire. I’ve got to move on.”

“Wait! When will I see you again? I’ve got so many questions. Aren’t you going to stay and watch the movie?”

Rod laughed. “I’ve seen it. I like it. It gets some things right. It’s no Night of the Living Dead, but what is? Of course, you’re favorite was always that Doris Day/Rock Hudson movie Pillow Talk, wasn’t it?”

“You’ve been making that same Pillow Talk joke since 1977! I do kind of like Pillow Talk, truth be told. Ha. So, Rod, If you really have to leave, could you at least give me a closing line?”

Rod stood up and cleared his throat. “I have always been and shall ever be your friend….Live long and prosper, Chip.”

Wrath of Khan, Northlake Festival, Summer 1982...” Chip closed his eyes in remembrance before a voice from his right startled him.

“Hey, can you move over one?” Dana said.

Chip looked in her direction for a moment before staring back to the chair by to left of him, which was now empty. He moved over to the open seat that Rod had occupied a moment earlier and Dana sat down in the seat next to him.

“What’s this movie about again?” She said sitting down as the lights dimmed.