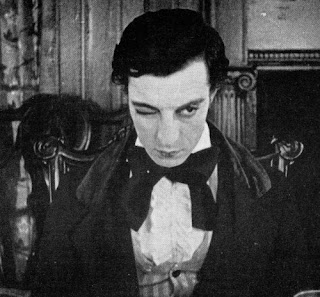 I admit to watching all the Buster Keaton shorts for this blog through the magic of YouTube. And this one was good, though I admit to not enjoying it as much as Seven Chances or Sherlock Jr.

In the late 70's I discovered a place to buy Super 8 movies called BlackHawk films. This was before there was a anything called vid-e-o ka-sets or Dee-Vee-Dee's. Since the Super 8 projector was silent, the best thing to get was, of course, silent films. I remember getting some shorts like Stan Laurel's Just Rambling Along, Laurel and Hardy's Liberty and Charlie Chaplin's The Pawnshop. We also had a short called Have Badge Will Travel, which was just a shortened silent version of Abbott and Costello Meet the Keystone Kops.

I certainly enjoyed them, but the one thing they didn't have was the music. I only bring this up because of how not having the music for this film really reminded me as to what I was missing.

If someone decides to post a YouTube of Our Hospitality with an accompanying score, I may be tempted to try it again.

Posted by 1001: A Film Odyssey is produced, directed and written by Chris, a librarian. at 6:07 PM