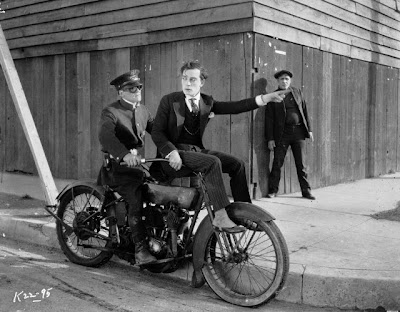 Sherlock Jr. packs an awful lot into its 44 minute running time. Buster Keaton has two passions in this film: as a projectionist and as an amateur detective. The two passions meld as Buster tries to solve the mystery of who robbed his finance's father. Of course, Buster is initially accused of the crime.

But the plot takes a back seat to the creativity and the final chase scene. The scene where projectionist Keaton's double jumps into the movie screen is still pretty impressive (Who needs CGI? And the Woody Allen's Purple Rose of Cairo owes a debt of gratitude here.)

The chase finale is just as good as the one in Seven Chances. Buster jumps between trains, through traffic, over a bridge where two trucks come together and in and out many other tricky predicaments. Buster's car lands in the water and he creatively turns it into a sailboat. Without excessive use of special effects, it makes me wonder how these silent screen comedians survived to the end of the picture.

There are little pleasures here too. The scene of Buster walking instep directly behind the man he is shadowing is yet one of them.

There is also the great final punchline where Buster and his reconciled girl view other actors on screen and emulate what is going on in the screen.

Another Buster classic.
Posted by 1001: A Film Odyssey is produced, directed and written by Chris, a librarian. at 6:03 PM