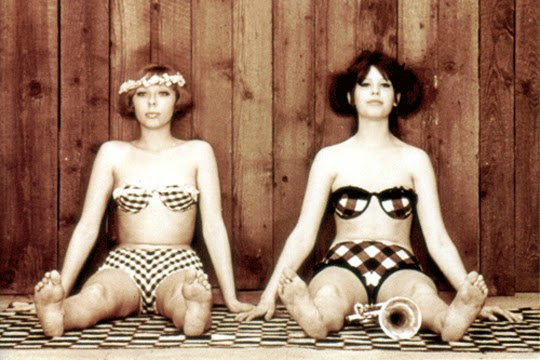 1. What happens?
These two young chicks named Daisy get into a lot of innocent mischief involving playing with food, manipulating older men, taking baths and cutting up clothes before they get into a Cartesian conversation about the meaning of life itself and whether or not the frivolity of their existence is truly significant or just an existential....never mind, I'm not really sure what happens.

2. Was it heavy? Did it achieve total heaviosity?
There were times that it achieved a bit of heaviness, especially in a lot of the quick cuts and changes in color.

3. What was your favorite part?
The continuous editing kept me on my toes.

4. What was your least favorite part?
The continuous editing kept me off-balanced and confused

5. Did you get it?
Not until the end credit that said something to the effect that "this film is dedicated to those who only get upset over stomped-over lettuce." Thanks for the explanation, otherwise, I wouldn't have gotten it.

6. Might the viewing experience have been enhanced from either prescription or non-prescription medication of some kind?
Hallucinogenics all the way.

7. What about the sex?
The two Daises do parade around a lot in underwear, bikinis and in bathtubs. All in a coquettish sort of way.

8. What about the violence?
The movie begins with an atomic bomb and ends with the remnants of a burned out city.

9. Describe this film in one sentence starting with "This is the film..."
This is the film that had depth, meaning and subtext and completely baffled me.
So if you are scoring at home, it's Daises 1 Me 0.


I think 71 minutes with the Daisies is enough for one lifetime.
Posted by 1001: A Film Odyssey is produced, directed and written by Chris, a librarian. at 5:43 AM