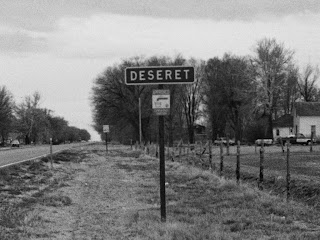 There are several experimental or avant garde films on the 1001 movie list. In trying to figure out how to deal with them, I have tried to handle these often tough nuts to crack by just watching them and trying to answer ten basic questions about them on my personally devised standardized test. So let us begin with...

1.What happens?
A narrator reads a series of New York Times stories about the Utah territory of Deseret as we simultaneously see shots of fields, deserts, waterfalls and livestock. The film starts off with black and white shots of American vistas, which I presume to be Utah. The narrator discusses such subjects as altercations between The Church of the Latter Day Saints and Native-Americans during the 1850’s. The narrator goes on to talk about Polygamy and organized violence as we see more shots of fields and deserts. We hear tales of Brigham Young and the Civil War interspersed with shots of… airplanes? We continue on into the 20th century with some color shots of what we might presume is the Utah territory and more news on the region through the World Wars and ending in the early 1990’s. To tell you the truth, I think I nodded off a bit between the part where Utah become a state and World War I.

2. Was it heavy? Did it achieve total heaviosity?
I don’t think it quite got there.

3. What was your favorite part?
I did like the way they incorporated the stories about Brigham Young into the mix. And frankly, the stories where they dished some dirt on ole B. Y. were pretty interesting.

4. What was your least favorite part?
I’m guessing that would be the early 20th century part when I nodded off. A little hazy on the details there.

5. Did you get it?
I think they were trying to tell a narrative in a different way. I get and respect that. That doesn’t mean I found it all that riveting. But I guess if I want something more exciting in this field I could always watch Ken Burns special about the National Parks!

6. Might the viewing experience have been enhanced from either prescription or non-prescription medication of some kind?
Not this time. Okay, maybe a couple of uppers to get through the slower parts.

7. What about the sex?You remember those condom commercials where they used to show wheat fields and vistas to avoid alluding to sex directly? I suppose when they showed the wheat fields and vistas during Deseret my mind occasionally wandered to thoughts of those commercials. And since condoms are related to sex…or the prevention of pregnancy…never mind…there isn’t any sex.

8. What about the violence?
There are some pretty graphic descriptions of massacres and the like, though since it is being read over waterfalls and livestock, it is up to the viewer’s imagination to visualize the carnage.

9. Describe this film in one sentence starting with "This is the film..."
This is the film that reminds be of some of those filmstrips I saw in elementary school where I would almost invariably ask my instructor, “Are we going to be tested on this?”

10. Would you watch it again?
Not unless it’s going to be on the test.