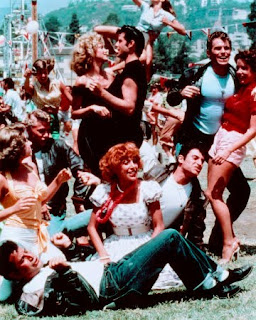 My thoughts on the worst movie of all time: Grease.

Okay. Grease isn't really the worst movie of all time. But it's definitely not a favorite.

The first time I saw this musical ode to 50’s I wasn’t overly impressed, but I wasn’t particularly appalled either. The following year, Hair, the musical ode to the 60’s was released. This was a far superior musical in my view. “Hair will be around and people will forget Grease.” I said. Well, it seems the opposite happened.
Grease has stayed around becoming an almost generational thing celebrating 20, 25 and 30th anniversary video releases.

Hair is only a footnote now. (Sorry Treat Williams. I tried.)

My displeasure at this turn of events made me dislike Grease all the more. But because of its inclusion in 1001 Movies, I thought in the spirit of open-mindedness I would give it one last chance.

Here’s the bad
1) You know how some of the great musicals smoothly transition from spoken dialogue to musical numbers? This doesn’t happen often in Grease. Numbers like Hopelessly Devoted to You just seem to start randomly like they’re being cranked out of a karaoke machine.
2) Casting Stockard Channing who actually attended high school in the 50’s as a high school student is a bit of a stretch.
3) And the drag race down “Thunder Road” seems less of race than just driving around aimlessly until they declare Danny the winner. I was expecting Spritle and Chim Chim to jump out of the back trunk at any moment.
4) Some of the cameos are curious too: What exactly is Edd “Kookie” Byrnes (Vince Fontaine) doing during the National Bandstand segment? He seems to be just wandering around aimlessly. Was he still in the movie? Kookie’s gone rogue! Where was the director to rein in this has-been?
And why did they have to invade the old actors home to cast the raspy voiced Joan Blondell as an octogenarian waitress? (This is a personal quibble. I just want to remember Joan as the sexy chanteuse from Gold Diggers of 1933.)
5) Coach Sid Caesar takes Danny to try his hand at different sports, wrestling, basketball, baseball, track etc. Does this strange high school have all its sports seasons simultaneously? Has this movie turned into the The Swimmer all of a sudden?
6) The T-Birds imitation of the Three Stooges get old quickly--like after one time.
7) And why are they all so mean to Eugene? This might be considered a hate crime today, if we can figure out what minority group Eugene belongs to.
8) The final song when the entire cast sings We go together like rama lama ding dong or whatever still makes me kinda queasy. Check that--very queasy.
9) And for a “family” film that likes to talk about flogging your log and teaches us that being a slut is much better than being a nice girl…well, why exactly is this considered a family film again?
10) And did they have to rip-off the flying car ending from Chitty Chitty Bang Bang? If you’re going to rip off a movie, at least rip off a good one next time. (And the next time for Producer Alan Carr was the Village People epic, Can’t Stop the Music, which must have seemed like a good idea at the time to someone.)

The Neutral
1) Sha Na Na’s appearance. I can’t decide to put this in the positive or negative column. An interesting footnote is Sha Na Na is in at least two of the listings in 1001 movies, Woodstock being the other. I say at least two. They may have had a cameo in Crouching Tiger, Hidden Dragon that I may have missed.


The good (And it really is painful to say anything nice about a movie that
I’ve scoffed at for years. )
1) I must admit to liking the song Summer Nights. I thought the contrasting viewpoints and dancing was good here. (Yep, saying that was indeed painful)
2) And despite being long in the tooth for a high schooler, Stockard Channing is admittedly good.
3) As is Travolta, who does a pretty decent Elvis impersonation on the song Greased Lighting.
4) And Olivia Newton-John has nice legs.
5) And Lorenzo Lamas has no audible dialogue, which is always a plus.
6) I also like Didi Conn, but I might be thinking of her in Shining Time Station and not this movie.
7) The Frankie Avalon number isn’t as bad as I remember.
8) The rumor in the drive-in scene going from car to car about Rizzo’s pregnancy is the best-choreographed scene in the whole movie.
9) And Michael Tucci as Sonny is annoying here, but did later become president of the Law Review on the TV version of The Paper Chase in later years. Wait, that’s more of a bad thing. I can come up with something else good…
I’m trying to be nice. I really am…

Oh, the hell with it. I’m just going to watch my old copy of Hair on Betamax.
Posted by 1001: A Film Odyssey is produced, directed and written by Chris, a librarian. at 7:27 PM