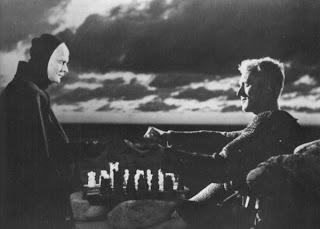 Warning: If you take a college film class you will probably have to see this film.

Second Warning: Do not confuse with the Demi Moore 80's film The Seventh Sign

Some have said that it is a useful (I think it was critic David Denby) to view classics at different times in your life and though the work remains the same, how it affects you differs according to the stage of your life in which you view it. (See or read it as a whining-school boy, then when you are bearded like a pard and then when you are wearing pantaloons and pouchy…I think my all the world’s a stage speech might be a little off.)

I’ve seen The Seventh Seal (Det sjunde inseglet) three times now, in my 20’s, 30’s and 40’s. It absolutely blew me away on my first viewing. The second time I saw it, I still thought it was a good film, but not as great as I thought it was initially. This latest viewing, made me think I was right the first time. (Perhaps on my second viewing I had a cold or something.)

Not only is this a movie you should see before you die, I think if you could time it right, this should be the movie you see ON the day you die. (Well, you come up with something more appropriate!)

A brief response to criticism of Bergman

He’s too depressing
There’s much heroism in this film that makes me feel better about the human animal. Besides, you try make a movie set during the Bubonic Plague or the Crusades and see how happy YOU can make it.

He has no sense of humor
The scene where death cuts the performer down from the tree is funny. Also, the knight’s squire and the acting troop performers are very funny. The dumb blacksmith is very, very funny. Give me a minute and I'll come up with a part that's very, very, very funny. What do you want? 1349: The Musical?

His films are boring
I don’t find him boring (Okay, not the greatest of comebacks. Deal with it.)

I wanted to list some of the standout actors in this film and I really feel like listing the entire cast, so just go to IMDB and read the entire cast list for Det sjunde inseglet. I envision them forming a human chain with death leading the way and taking their bows along the way to a thunderous ovation. Well, I’ll list one personal favorite: Gunnar Björnstrand.

I meant to end this blog, but I had to mention what a great scene the procession of sinners and monks who are lashing each other for the sins they committed is.

And...the scene where the devout knight Antonius and secular squire Jons view the buring of the witch from different perspectives.

And...don't forget the scene where most of the cast is introducing themselves so casually to death.

It is finished.
Posted by 1001: A Film Odyssey is produced, directed and written by Chris, a librarian. at 7:58 PM