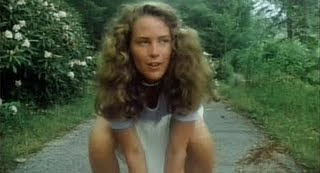 When the dastardly General William Tecumseh Sherman cut his destructive path during the War of Northern Aggression through Atlanta, Savannah and the Carolinas he left in his wake…a guy trying to find a date about a hundred years later.

I didn’t know what to make of this documentary at first. Ross McElwee starts out trying to study Sherman’s March, but digresses most of the movie meeting women he knew before, women he dated before, women he wanted to date before and women he never met before. The subtitle A Meditation on the Possibility of Romantic Love In the South During an Era of Nuclear Weapons Proliferation is really closer to the mark than the main one.

Despite a slow beginning, I became interested in his journey and the various women he meets. And at 155 minutes, it’s a journey that took only slightly less time than Sherman’s actual march to the sea.

Here are some of the women he encounters listed here for no other reason than because I feel like listing them.

Mary, a childhood friend who now (now being 1986) models and fantasizes about Christopher Reeve. Pretty in a mannered, wholesome way, Mary is divorced, yet doesn’t believe in divorce. Sounds problmatic for future relationships.

Pat, wants to find work as an actress. She likes to talk about not wearing underpants and does odd gyrations that she describes as “cellulite excericses.” Ross describes his attraction to Pat as “primal,” which most of the male viewers of this film will probably share. However, right when Pat is the center of this film as herself, she leaves town in the off chance to be in a Burt Reynolds film. Leave one of the 1001 movies you must see before you die to be in Cannonball Run 17? Bad career move, Pat.

Claudia, is pretty, seems nice. Problem with Claudia is her settlement “friends.” Let’s just say that a relationship with Claudia would probably end with a hostage situation and ATF officers. Ross did well to move on here.

Winnie seems to have it all. Sexy, back to nature, likes to sunbathe nude, can milk a cow and is working on a P.H.D. in linguistics. She might be worth fighting the mosquitos for, but if I remember right, she was committed to someone else. Sorry, Ross.

Then there’s Jackie, who Ross dated before. Cute, petite, committed peace activist, teacher. Jackie thinks that a politcal ally is more important than a lover. You must have hurt her Ross. Move on you cad!

Then we meet the woman who can only be described as a force of nature, Charleen. Charleen is Ross’ ex-teacher who knows she has found the right girl for Ross. It seems Ross is failing in his love life and Charleen feels the need to take over for him. And I mean take over! Despite her pushiness, Charleen’s southern charm makes her likeable.

Unfortuneately, Dee, the woman Charleen trys to get Ross to marry is a little on the bland side. Sweet, nice. Looking for a Mormon. Ross isn’t a Mormon. Relationship over.

Then there’s Joy the rock singer who is about to move away from the Carolinas to seek fame in New York. (What’s wrong with just rocking out at the Charlotte 7-11?) Ross admits to becoming an instant groupie for her and she does have that cute flippy 80’s hair, but a future failed attempt at fame in the Big Apple awaits and they say their goodbyes.

Finally, Karen. The unobtainable girl from high school with the killer smile who has since become a lawyer still has Ross’s number. Ross tries to talk her into falling in love with him, but she is in love with a guy who I’m sure doesn’t treat her as well as he should. Ross actually spends a couple of days with her boyfriend and a couple of his friends. They move giant plastic dinosaurs from place to place. Ross says he never understands what it was all about. All I know, if I were moving giant plastic dinosaurs all over the place, I’d say, “What the hell is this all about?”

Then Ross sees a movie being made. He tries to film the cast and crew. It’s a movie with, oh no, Burt Reynolds again! Ross is kicked off the set and threatened with arrest. A woman Ross interviews shows a sleeping baby that was kissed by Burt. The woman says about the baby, “She will know. She must know the truth about the day she was kissed by a guy in a toupee who played Dan August on TV.” (Quote not exact)

Ross later found a wife, teaches at Harvard and hopefully has lived happily since.
Posted by 1001: A Film Odyssey is produced, directed and written by Chris, a librarian. at 11:16 PM