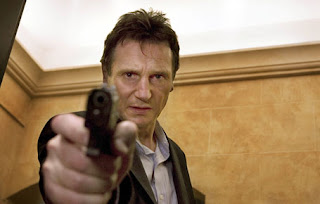 As the lights came up in the movie theater, I found myself unable to raise my head out of my hands. The world had become a still and cold place. I finally forced myself upright in the hope to get some commiseration from the person in the seat to my right. But this person was actually smiling! The man in the seat to my left was shaking his head. But it wasn’t in sorrow. He even high-fived the teenager in the seat next to him. At that point, the audience burst into applause. I looked around the theater in amazement. Had the world gone mad? Was this Invasion of the Body Snatchers? Or could I have somehow entered The Twilight Zone?

I ran out of the theater past the concession stands and leaned against the glass door next to the box office. I picked up a stray newspaper that contained blurbs raving about the film. “A briskly paced action thriller,” “Liam Neeson has never been better,” “The best action film of the year,” were the first three headings. I crumpled it and cast it aside.

The fogginess that had infiltrated my thoughts began to turn to anger.
A couple walked up to me and said, “Hey, you were in the theater with us. Wasn’t Taken the most awesome movie you ever saw?” Their timing was bad, because I was no longer able to just nod, smile or blow them off. I tilted my head and glared at them. “Of course.” I shouted. The tone of my voice made them jump back. “Yes, I like a movie with a plot that is basically ‘I told you not to go to stay in an expensive part of Paris, you might get abducted in broad daylight. And I told you there might be Albanian slave traders there, but it's lucky you're on the phone with me right now and I just happen to know everything about international crime and espionage and you are at an isolated place in the adjoing yet accessible suite to where you are staying so the kidnappers can't see you but you can see them through a window abducting your friend so when they come get you all you have to do is yell out a description of them as soon as they take you and I'll piece it all together and kill off half of Europe to save you.’ And no, no that didn’t at all obliterate my suspension of disbelief. Not at all!"

The couple had actually walked away before I was halfway done with my speech, but I was going to shout it aloud for anyone who wished to listen. I saw the next line of customers waiting to go into the next showing. I tried to will them to see the mistake they were making, but they mostly ignored me and when they did acknowledge me, only viewed me with hostility.

My head started to throb again and I knew I couldn’t stay there any longer. I ran across the parking lot into a neighboring park. I saw a bench by a fountain and sat. My solitude gave me a little comfort as I took a deep breath. I tilted back my head and tried to continue to forget about the horror of the last couple of hours as I heard a voice calling my name.

“Chris!” I heard a second time.

I had thought the park was empty. I stood up. “Who’s there? What do you want?”

I followed the voice past the swing sets to the baseball field. There he stood at second base.

“Liam Neeson!” I said in a strained voice.

“My friend.” He cocked his head in discomfort as he spoke. “Why couldn’t you just enjoy the movie like everyone else? It would have been so easy for you to be like the rest.”

“Because” I said to him defiantly. “It wasn’t a movie. It was just one long stunt show. Offensively outlandish! Just an excuse to shoot something or blow something up. As unrealistic action movies go, It made Con Air look like My Dinner With Andre!”

It was then I noticed that he was holding an Uzi that was pointed at me. I looked around for a means to escape, but I didn’t think I would ever make it to safety before he could plow me down. He cocked his head again and part of his cheek began splitting apart.

“Oh, the hell with it.” Liam put his finger inside the opening in his cheek and pulled. Much to my horror, his face came apart with one pull.
I was in such a state of shock that I missed perhaps my only opportunity to get away. I looked back at the face. It wasn’t Liam Neeson. It was…

“George Lucas!” I gasped in fear. “I didn’t know you had anything to do with this movie!”

He laughed. “You are so naïve. Don’t you see I am the father of all such movies. I started it all. Well, I did have a little help.”

At that point, another figure came out of the dugout holding an AK-47.

Spielberg walked toward Lucas and they pointed their weapons at my head. “Yes, and you are going to add the film you just saw to your blog and give it a rave review.

“Oh, did I forget to mention.” Lucas said. “It’s already too late.”

At this point, Spielberg pulled a laptop seemingly out of his bum and dropped it in front of me. The Internet page that was in front of me was indeed my blogsite and the movie entry read Taken (2008).”

“This…this isn’t right. I would never put this movie on my blog. Some hacker...”

“Quiet” they said in unison.

“None of this matters.” Lucas continued. “You won’t get out of this alive. Ironically, if the world was like it was in a typical action film, you might be able to manufacture an unlikely escape. Too bad this is the real world and you are certain to die. Goodbye, Mr. Chips.”

I closed my eyes in resignation, taking some comfort in the fact that the last thing I would ever hear was a reference to a good movie. It was then I heard shots ringing out in a crossfire. I checked my body for holes as I opened my eyes.

I saw before me Lucas and Spielberg lying dead on the ground with their weapons unfired.

At that point, two men entered the baseball diamond. One from the first base side and one from the third base side. The figure that came from first base was holding a Mannlicher-Carcano rifle and as he approached, my heart raced in recognition.

He nodded in affirmation to me.

From third base came the second figure, who was carrying a Derringer pistol.
“And you’re Last Year at Marienband director Alan Resnias.” I said.

“We almost didn’t get here in time.” Paradjonov said in broken English as he dropped his gun down.

I dropped to my knees and contemplated the fallen bodies in front of me. I looked at Paradjonov and Resnais. “I don’t know how to thank you. I feel so ashamed. I made fun of your movies on my blog.”

“I know.” The Aremenian director said. “But I think you’re learning. You may one day learn the difference between art and commerce.

I looked at them again. “But aren’t you dead? I asked.

Paradjonov laughed. “I think you still have to learn the lesson that art endures…and lives on past its creator.”

“Oui.” Resnais said again before he and Paradjonov disappeared into the night.

I easily managed to raise my head out of my hands. The world remained a still and cold place, but that was no longer a problem. I looked for some commiseration from the person to my right, but the fact that I received none no longer bothered me.
Posted by 1001: A Film Odyssey is produced, directed and written by Chris, a librarian. at 8:17 AM