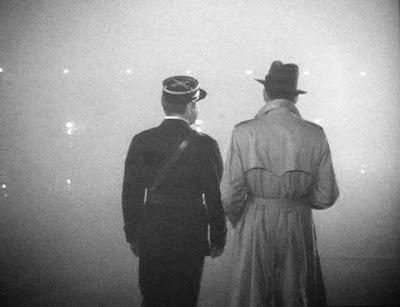 Rick: (An overweight man with a ill-fitting trench coat and a snap brimmed hat walks in front of the camera) Hello, Nancy. Thank you for giving us this forum. I’d like to introduce my colleague here, who you can just call Captain Renault.

A short man in what appears to be a homemade military uniform clicks his heals together and bows to the camera.

Rick: Me, you can just call me Rick.

Nancy: Okay, boys. I can see Simon Johnson tied up behind you. Is he unharmed?

Rick: He is unharmed. Not very happy, but unharmed.

Rick and Renault step aside so the camera can get a good shot of a figure who is tied, gagged and blindfolded.

Nancy Grace: Please, what is this all about? What is it you want?

Rick:It’s very simple. On the internet movie review site www.rottentomatoes.com, the critical consensus has a 99 % fresh rating for Casablanca, the greatest movie of all time. For those in your audience unaware of what that means, freshness means a positive rating. But why is it not 100%? I’ll tell you why! It’s all because of one man. One reviewer. Simon Johnson!

Nancy Grace: Are you kidding me? This whole kidnapping is because of a negative movie review?

Renault: (Holding up a laptop and reading from the screen) “Casablanca is perhaps the most overrated movie of all time. Its murky plot and clichéd characters I would call forgettable if anyone would ever give me five minutes to forget about this balderdash.”

Rick: Balderdash? He actually refereed to Casablanca as balderdash!

Renault sneers at Johnson who squirms in his seat.

Nancy Grace: My God! Don’t people have the right to a dissenting opinion? For the record, I for one love Casablanca, but I’m not going to abduct anyone who disagrees with me!

Rick: It’s not for us we do this Nancy. It’s for all the young people out there who may see that Casablanca didn’t get a 100% rating and perhaps decide to pass on it and watch The Evil Dead instead. The Evil Dead 100%, Casblanca 99%. Don’t you see a disconnect from reality there? And the younger generation will some day regret it. Maybe not today, maybe not tomorrow, but soon and for the rest of their lives.

After reciting this line, Renault and Rick give each other a high five.

Nancy Grace: The main disconnect from reality that I see is you two guys. How old are you guys? 35? 40? I think spending your adult life living in your parents basement has driven you plain crazy.

Rick: I’m going to ignore your little barbs, Nancy. We are fighting for a greater cause Listen to the evidence (Motioning to Renault)

Renault: (Reading from a notebook)
“Play It Sam, You Know the One I Mean.”
“Round up the usual suspects”
“Here’s looking at you kid”
“The problems of a couple of people don’t amount to a hill of beans.”
“Louie, this could be the beginning of a beautiful friendship.”

Rick: (Holding up hand for him to stop) Thanks, that’s enough. And that’s from one movie! And there’s more. Read the names Renault

Renault walks to the back of the room and puts on a LP on what appears to be an old Victrola behind Simon Johnson. He walks in front of him and begins reading a list as we can now hear a scratchy La Marseillaise playing in the background.

Rick: (Holding up a hand for Renault to stop) He could read more, but I think we’ve proven our point. What do you say to that?

Nancy Grace: (Exasperated) Oh, my. Oh, my. For once, I don’t know what to say. Just what is it that you want?

Rick: Our demands are simple. Remove the offending review off of Rotten Tomatoes. I want the world to be whole again.

Nancy Grace: And then you will release your Mr. Johnson? What if your demand isn’t met?

At this question, Rick and Renault turn to each other with a look of confustion on their faces. Three seconds later, the feed to the scene is lost.

Nancy Grace: Damn it. We’ve lost the feed. We’re out of time for this segment anyway. (Looking directly in the camera) Well, you’ve heard these demands, exclusive to CNN, from these two Casablanca fanatics. Will www.rotten tomatoes.com drop the review from their website? Is the first amendment itself at issue here? And will Simon Johnson be released if the ransom demands are met? You can bet we will be tracking this story in the days to come. In the meantime, (reaching down and holding out a book for the camera) don’t forget to pick up a new copy of my latest book, Fifty Shades of Murder. You’re going to love this one. Grace Belladonna, our intrepid cable news host/sleuth is on the job again. Will she be able to solve the case of serial S & M murders? (winking) I wouldn’t bet against her.

This is Nancy Grace. Goodnight.

End credits to Nancy Grace role as the song As Time Goes By Plays in the background.
Posted by 1001: A Film Odyssey is produced, directed and written by Chris, a librarian. at 4:20 PM