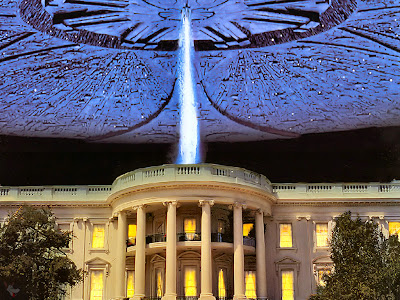 I realize this big budget 1996 aliwn invasion movie has its fans, but if I were pressed on this issue, I could probably come up with at least twenty alien invasion movies that I'd rather watch before Independence Day. So I checked that scholarly source called Wikipedia and made my list.

Alien/Alien Invasion Movies I'd rather watch than Independence Day that aren't in the 1001 movie book from that scholarly source called Wikipedia.

25 Plan Nine From Outer Space-All-time classic Ed Wood bad film that really is must viewing for any well rounded movie fan.
24 Zardoz-This 70's film with Sean Connery is just plain weird. People seem to either love it or hate it, but I'd still watch it over Independence Day.
23 The Creeping Terror-Best viewed on Mystery Science Theater 3000.
22 It Came from Outer Space Saw this during the 80's as part of a 3D spectacular double feature with The Creature From the Black Lagoon!
21 Robot Monster-The movie that prevents Plan Nine from being the worst movie of all time.
20 Teenagers from Outer Space-Raging hormones and aliens are just a bad mix.
19 Fire Maidens From Outer Space-Yet another, MST3K listing.
18 This Island Earth-This in fact was the film used for the MST3K feature film.
17 The Blob-Killer ooze creeps under the door and the world can only be saved by a young Steve McQueen and the lady that played Helen Crump!
16 Moster A-Go Go-My personal choice for the worst film of all time, but I'd still have more fun watching it than Independence Day.
15 Without Warning-Think it is interesting that Martin Landau and Jack Palance survived this monster mash to later win Oscars. Haven't seen this one in awhile, doubt if I'll get around to seeing again. Not listed in the Wikipedia list. Got to make a note to add this one.
14 Fire in the Sky-Straightfoward country folk who try to get the authorities to try to belive that aliens have landed. Can't say why, but I kind of like this one.
13 The Man Who Wasn’t There-Good movie. Coen Brothers. Only problem is that it is listed with the alien invasion movies and it isn't an alien invasion movie! The title character really is there! His invisibility is just a figurative allusion. He isn't Claude Rains invisible! Damn you Wikipedia!
12 2010-Underrated sequel to the Kubrick classic.
11 Predator-I would have given this Arnold adventure the 1001 nod over Independence Day, but nobody asked me.
10 Invaders From Mars-50's classic that was remade as a fair 80's remake. I'll go with the original for this list.
9 Liquid Sky-Heroin! Lesbians! Aliens! What's not to love?
8 Little Shop of Horrors-And I'm going with the musical version, because the original from American International isn't very good.
7 Cloverfield-Has the hand held camera film become passe? I did like the way it was used here.
6 Cocoon -I'm a little surprised this isn't on the 1001 list. Maybe they left it out because Steve Guttenberg's in it, I don't know.
5 Contact-Good adaptation of Carl Sagan's novel.
4 Brother From Another PlanetUnderrated 80's Indie Sci-Fi.
3 Repo Man-A real cult film if there ever was one. Also of interest that it was produced by ex-Monkee, Michael Nesmith.
2 Star Trek II or IV-The 1001 editors really need to pick at least one Star Trek movie for the 1001 list. I mean all three Star Wars movie are there! How bout some love for Spock!
1 Superman II-Still probably my favorite Superhero movie.