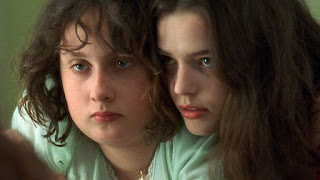 My thoughts on this movie has SPOLIERS!

I didn't know what to expect when I turned on Catherine Breillat's Fat Girl from Hulu Plus. I may have gotten more than I expected...

Anais is an overweight twelve or thirteen year old who has an attractive older sister named Elena, who is fifteen. She has a stern mother and a workaholic father. The film is set during a beach vacation for the family. The two sisters have moments of bonding and moments when they hate each other.

The two of them meet a college student named Fernando, who Elena begins a relationship with. The girls are sharing a room during their vacation stay and one night Fernando sneaks over to to see Elena. Fernando and Elena discuss their sexual options for a very long time as they assume Anais is asleep in the other bed. The give and take between Fernando and Elena (Spoiler: Men will sometimes exaggerate and lie in order to get sex) seems real, but these scenes are a bit off-putting (at least to me) because of her youth. They don't go all the way, but get together the following night and do.

During the first encounter, Anais is listening to them the whole time and Elena gets mad at her when she finds out and scolds her sister for listening in. Anais points out that Elena is the one at fault because she is the one that snuck a college man into her room in the first place!

During the second encounter, Anais secretly cries under her covers as she hears Elena and Fernando's sexual encounter.

After the father has already left the vacation resort, the mother finds out about what Elena and Fernando did and is angry to say the least. Elena realizes that she fell for Fernando's lines about loving her and Elena, Anais and her mother all drive off from their vacation resort-the mother giving the girls lectures the whole way.

Well, I thought that was it. A movie that did show some realistic relationships between sisters, though with some very uncomfortable scenes. It wouldn't be my choice for the 1001 book, but....wait...the movie isn't over yet.

In the final scene, the mother is tired of driving and pulls over at a rest stop to sleep. Then the front widow of the car is smashed! A madman with an ax plunges it into Elena, killing her instantly! He jumps into the car and strangles the mother! Anais gets out of the car and the man chases her into the woods and throws her down and rapes her!

I'm actually hoping this is a dream sequence of destruction like the ending of Zabriskie Point, but no! The police arrive the next day to investigate the crime scene and a dazed, but remarkably not-hysterical Anais's only thought seems to be that her rapist never raped her!

Okay, Catherine Breillat. Your ending shocked me! Stunned me! But it doesn't make me like you!

Warning: Do not see Fat Girl (If you have to see it at all) the same week you watch the film Irreversible. It might make for a very depressing week!