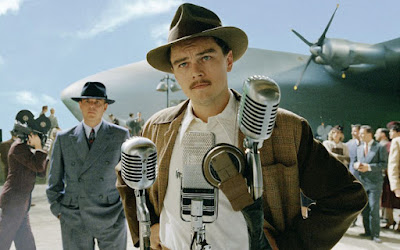 The first movie I saw about Howard Hughes was the 70's TV film The Amazing Howard Hughes with Tommy Lee Jones. I certainly liked it at the time and found Mr. Hughes a most fascinating figure. But how could you not find this eccentric billionaire who slowly dissolves into mental illness and seclusion interesting?

Scorsese's film The Aviator neatly emphasizes the "aeroaspects" parts of the Hughes legend, from the making of Hell's Angels to the growth of TWA to the manufacturing and flying of The Spruce Goose. The mental deterioration of Hughes is dramatized too, of course. I had my doubts about Leonardo Di Caprio in the lead role the first time I saw it, but with my second viewing, his performacnce has really grown on me.