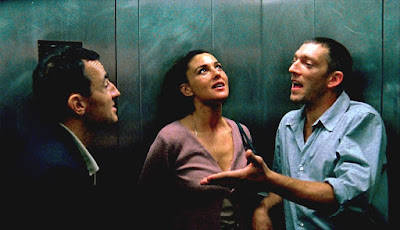 Similar to Memento in structure, Gaspar Noe's Irreversible tells the story of a rape told with the scenes presented in reverse sequence. Though compared to  Irreversible, Memento looks almost quaintly mainstream. Irreversible is grim, brutal, unpleasant, but undeniably effective. There are a couple of scenes of violence in this film that are really unlike anything I've seen on the screen before. Definitely not for the faint of heart and it's very unlikely I'll ever want to watch this one again.

Book recommendation for those who like their narratives told in reverse would by Time's Arrow by Martin Amis.

Thank goodness I didn't ask my wife to watch this one with me like I was gong to do! I definitely need a drink now!
Posted by 1001: A Film Odyssey is produced, directed and written by Chris, a librarian. at 3:36 PM