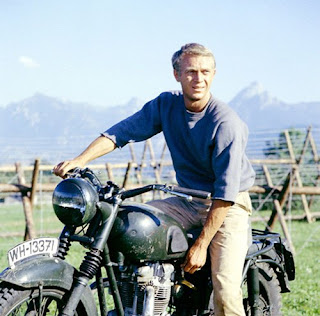 Steve McQueen and motorcycle in The Great Escape

The Great Escape has always been one of my favorite movies since I first saw it on television in the seventies (in two parts over two nights). The story of the great Allied World War II prison escape from a German P.O.W. is exciting, historically interesting, has a great cast and has many memorable little moments, too. And I must also acknowledge that Steve McQueen being chased by Nazis on motorcycle will never cease to be anything but awesome! My favorite character has to be Charles Bronson as Danny, the claustrophobic tunnel digger. The movie is so bloody enjoyable I often lose sight of the fact that most of the prisoners are either killed or recaptured! 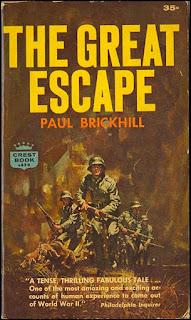 Origin: The movie is based on the non-fiction book of the same name by Paul Brickhill. 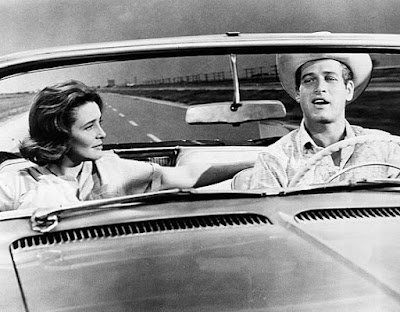 Hud is a movie I’ve never seen before. It is about a no-account, but somehow likeable modern day cowpoke played by Paul Newman. Much of the conflict of the film revolves around Hud’s relationship with his honorable father (Melvyn Douglas), idol worshipping nephew (Brandon de Wilde) and attractive housekeeper (Patricia Neal). Despite Hud being depicted as a bad boy in the film, the description of the character in the original book Horseman, Pass By by Larry McMurtry has Hud as a much more unsympathetic character. It’s beautifully shot in black and white and I would agree it is something to be seen at least once. 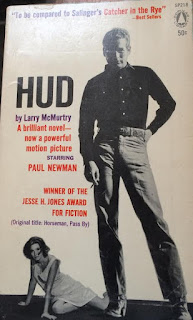 
Here are some other films released in 1963 that I've seen that didn't quite have the right stuff to make the 1001 movie book, many of which have book origins of their own. 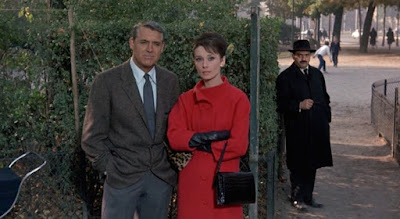 Grant and Hepburn in Charade

Charade-I finally got around to seeing this Hitchcock-like thriller featuring the unbeatable team of Cary Grant and Audrey Hepburn only recently. Lots of twists and turns in this fun and recommended Stanley Donen film. 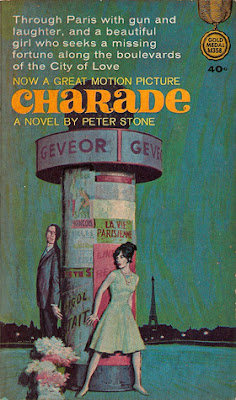 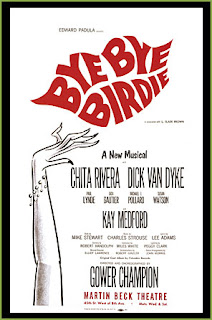 From the Broadway play

Origins: The Broadway musical is based on an Elvis-like entertainer that gets drafted. A new version of this  show is probably coming soon to a community theater near you! 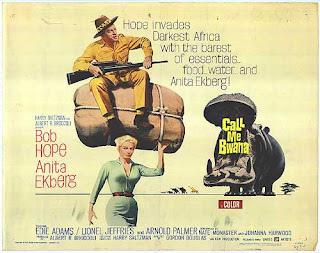 Movie poster for Call Me Bwana


Call Me Bwana-The Bob Hope movie formula had run a little dry by the 1960’s. I remember this had a few laughs when I saw it as a kid.

Origins: Not sure…but I do recommend Richard Zoglin’s book Hope: Entertainer of the Century if you are interested in the life and career of Mr. Hope. 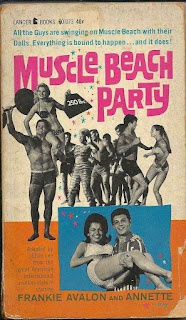 That Muscle Beach Party novelization
you've been waiting for!

Origins: Apparently form the mind of legendary B-movie producer Samuel Z. Arkoff. No books for Beach Party, but I did find that Muscle Beach Party was deemed worthy of a novelization! That would be an interesting collector's item that your neighbor in all likelihood doesn't have! 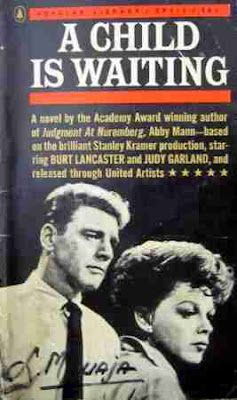 A Child is Waiting novelization
by Abby Mann


A Child is Waiting-Moving film about a school for developmentally challenged children from director John Cassevetes and featuring Burt Lancaster and Judy Garland.

Origins: This was a originally a teleplay from Abby Mann in the 1950’s first shown on TV as an episode of Westinghouse’s Studio One in Hollywood….You can be sure if it’s Westinghouse! 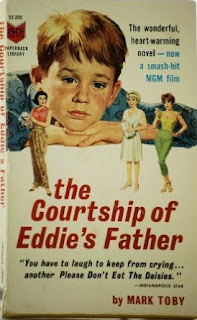 The Courtship of Eddie's Father
novel by Mark Toby 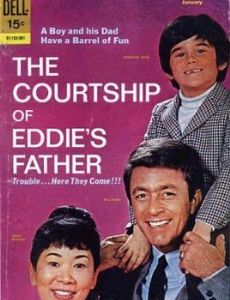 The Courtship of Eddie's Father
comic book from Dell


The Courtship of Eddie’s Father came to the screen this year with Ron Howard as a boy trying to find a suitable mate for his widowed dad, Glenn Ford.

Origins: Of course, when I think of  The Courtship of Eddie’s Father, I think of one of my favorite childhood television shows with Bill Bixby and Brandon Cruz in the roles of father and Eddie. The show even spawned a brief comic book series! I believe the Cracked (or was it MAD?) magazine satire of the show was called The Cornchip of Oddie’s Father…Anyway, the actual origin of all of this was a novel of he same name by Mark Toby. 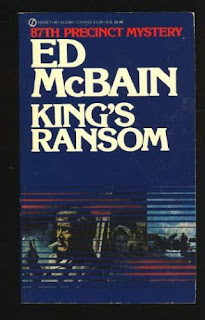 High and Low-For those who may think of Akira Kurosawa/Toshiro Mifune films as only being of the Samurai variety, I would highly recommend this modern day police procedural with Mifune playing an unusually sympathetic character for him as the father of a kidnapped girl.

Origin: Interesting that the origin of this story is from the Ed McBain thriller King’s Ransom! 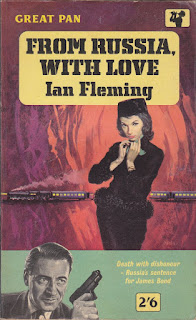 Ian Fleming's
From Russia with Love

From Russia with Love is one of the best of the Sean Connery Bond films. It helped that this was released while the Cold War was a bit warm and featured Robert Shaw as a dastardly villain.


Origins: From Russia with Love was Ian Fleming's fifth James Bond novel and published in 1957. The order of the release of the Fleming novels actually surprised me. Casino Royale was first. Followed by Live and Let Die, Moonraker and Diamonds are Forever. 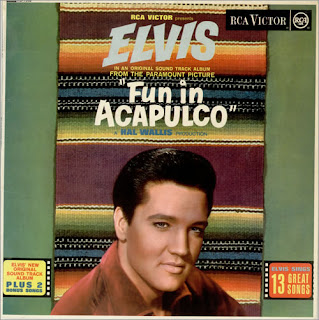 The rather bland cover of the
Fun in Acapulco soundtrack
(If you have Ursula Andress in a movie,
put her on the damn record cover!)

I remember watching the Elvis Presley film Fun in Acapulco on television the night that Elvis died.

Origins: Not sure who really came up with those Elvis movie plotlines. It’s mostly about the soundtrack, anyway. 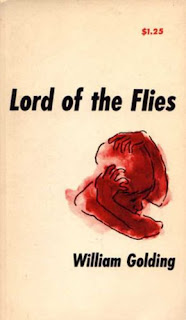 The definitive Lord of the Flies book cover

Lord of the Flies-The first and probably best adaptation of William Golding’s book about a group of stranded boys who slowly begin to resort to their most primitive nature was Peter Brook’s film from this year.

Origins: Who among us wasn’t assigned to read this book in school at one time or another? 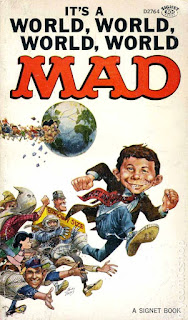 It's a Mad, Mad, Mad, Mad World-Stanley Kramer’s all-star comedy epic about a mad search for a fortune will always be one of my favorite movies even if a perhaps less biased eye might think it hasn’t aged too well. Of all the stars in the movie, I think it’s Dick Shawn as a beatnik mama’s boy that steals the show.

Origins: From the pens of screenwriting couple William and Tania Rose 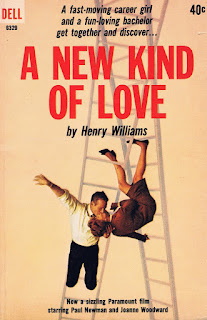 A New Kind of Love-Forgettable romantic comedy with the powerhouse team of Paul Newman and Joanne Woodward.

Origin: It did have a literary origin, a novel of the same name by Henry Williams…though after further study it appears this is just a novelization. I wonder if more people read A New Kind of Love the book or Muscle Beach Party, the book? 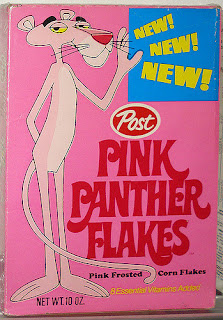 Origin: Blake Edwards was listed as the screenwriter as well as being the director. The film led to several films with Peter Sellers in the role of Closeau, one with Alan Arkin, a re-adaptation years later with Steve Martin in the title role, a 1970's cartoon featuring the actual cartoon panther and briefly a cereal in the early 70's (pictured above) that I mostly remember as tasting like Frosted Flakes. 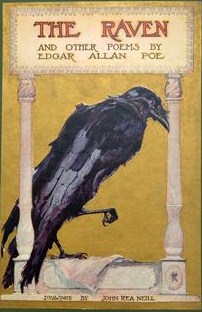 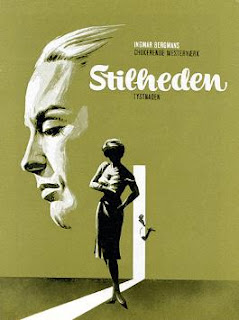 The Silence-The one film in the Bergman trilogy of films from the early sixties which include Winter Light and Through a Glass Darkly that did NOT make the 1001 book. I think it's as good as the others, so watch it anyway if you are any kind of  Bergman fan.

Origins: The dark mind of Ingmar Bergman, I suppose. I really like the poster above for the Danish release of The Silence. 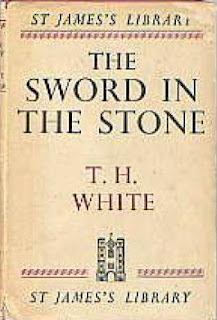 Sword in the Stone-Last Disney animated film made before the death of Walt Disney.


I will also list three of my favorite Mystery Science Theater episodes from that show that features 1963 movies.. 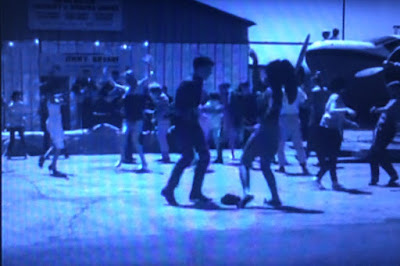 The Skydivers, which depicts the goings on at a small skydiving school with hip musical interludes and directed by legendary bad film director Coleman Francis. 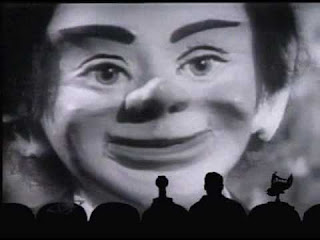 Devil Doll, not the best film about a ventriloquist dummy that takes on human features but lends itself well to satire from the MST crew... 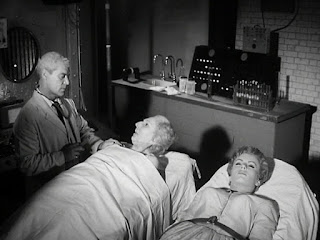 ...and The Atomic Brain aka Monstrosity, one of the funnest of the brain transplant movies this side of The Incredible Two-Headed Transplant, The Thing with Two Heads and The Brain that Wouldn't Die! 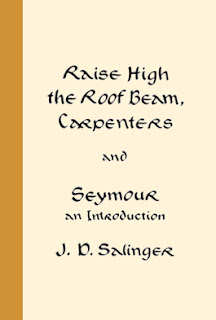 One of my favorite works of literature of the 60's is J. D. Salinger's 1963 novella, Raise High the Roof Beam Carpenters. So, yes, he did write something other than Catcher in the Rye! Until next time...