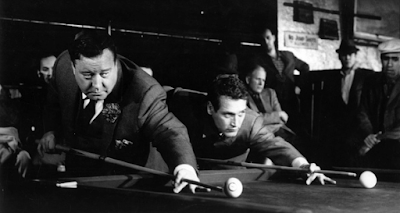 Jackie Gleason and Paul Newman in The Hustler

From the clearly influenced by department: Later in 1961, The Twilight Zone produced one of it's classic episodes called A Game of Pool in which pool hustler Jesse Cardiff (Jack Klugman) played a game against pool legend Fats Brown (Jonathan Winters). 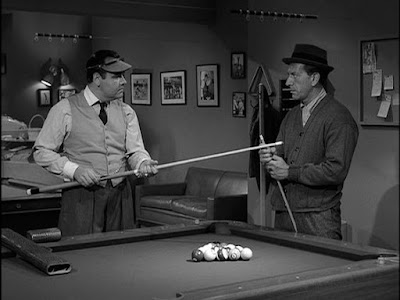 Klugman and Winters prepare to play A Game of Pool
The legend of Minnesota Fats: Growing up in the 70's, I saw a famous pool player named Minnesota Fats on television shows like The Wide World of Sports and in commercials. I was also aware of the movie The Hustler which featured Fast Eddie Felson playing the legendary Fats. I simply assumed the movie was based on the real life pool player. What I didn't know was that is was actually the other way around! The man I saw was actually a pool player named Rudolph Wanderone who changed his name to Minnesota Fats after the movie came out! He was never the pool player that Willie Mosconi was, but it shows what adopting a catchy moniker can do for your enduring legend. 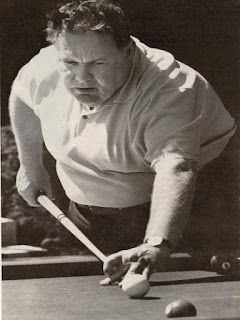 Calling Maxwell Smart: I was also thinking about the game below form the early 70's-Skittle Pool from Aurora. The object of the game was to sling a little pool ball on a little pendulum and try to knock the balls in the hole of what is sort of like a real but shrunken pool table.It wasn't really much of a game, but I loved the commercial. Don Adams came into a room of tough guys with his Skittle Pool game and declares, "I came to play Wisconsin Skinny" and proceeds to challenge him to a game. "You a hustler?" "No, a salesman." "What do you sell?" "Skittle Pool!" Adams wins the match, but ends up with a black eye and some missing teeth...sometimes the commercial is just better than the game. 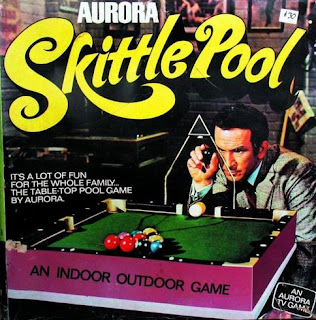 Elia Kazan's Splendor in the Grass might be the most famous American film from the 60's that I had never seen before. A coming of age film set in the late 20's, it features Warren Beatty as a football player who falls in love with Natalie Wood, a girl from the other side of the tracks. The plot of the film doesn't lapse into soap opera as much as it might, due largely to the Oscar winning screenplay by William Inge. The film put Beatty on the map, but it is Natalie Wood as the good girl who has to contend with rejection from the man she loves, a near-rape, a suicide attempt and a descent into madness is the one who really shines here the most. Also of note, is Barbara Loden as Beatty's hard partying sister. 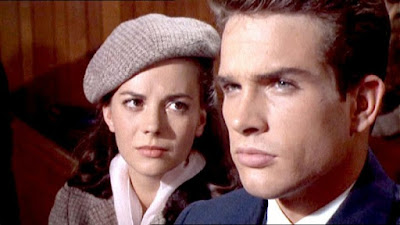 Natalie Wood and Warren Beatty in Splendor in the Grass 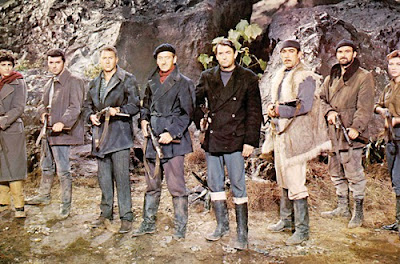 The Guns of Navarone

1. Guns of Navarone-Actually, the most famous American movie from the 60's I've never seen, might be this film instead of Splendor in the Grass. The 1001 book does not include The Guns of Navarone, but I really thought it was something I needed to add to my viewing resume. It is the story of a team of commandos hired to thwart German intelligence by destroying two German superguns on the Island of Navarone. The mission is dangerous and most, if not all, are likely to survive...Yet, they do survive, getting through scrape after scrape. I do understand in an action film you can't have your main characters being knocked off too early, but one scene where they destroy a German ship and the crew in hand to hand combat may be an exciting scene, but it is one they seem to accomplish a bit too easily.

The film Guns reminds me the most of is The Dirty Dozen, only it's more like The Dirty Half Dozen, with a couple of hard scrabble female fighters they pick up along the way. I do realize The Dirty Dozen came after The Guns of Navarone, but my perception is what it is. The big name cast is headed by Gregory Peck, Anthony Quinn and David Niven. Would it make my book? I think so. It should certainly make any list of top 100 action films.

2. The Absent-Minded Professor- Certainly a long time since I've seen this Fred MacMurray Disney vehicle where Fred invents a strange substance called flubber. Not to be confused with the sequel Son of Flubber or the remake Flubber with Robin Williams. It's also not to be confused with MacMurray's other Disney vehicle, The Shaggy Dog. A sequel to that film was made in the 70's called The Shaggy D. A. with Dean Jones and the original was remade in 2006 with Tim Allen...I digress.

3.  Babes in Toyland- Another Disney film, this one based on the Victor Herbert operetta starring Annette Funicello, Ray Bolger and Ed Wynn. I had a conversation with my brother once when he referred to this film as the original Babes and Toyland and I told him that the original was made in 1934 under the title of March of the Wooden Soldiers with Laurel and Hardy. He scoffed. To see who's right, check Wikipedia...that's all I'm saying.

4. The Children's Hour-William Wyler's take on the Lillian Hellman play about two teachers plagued by rumors of lesbianism. The film stars Audrey Hepburn and Shirley MacLaine...this might be worth a revisit. 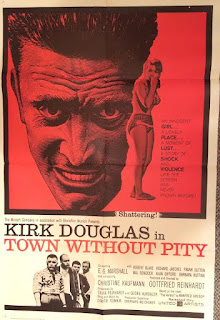 My prized Town Without Pity poster

5. Town Without Pity-More people are probably more familiar with the title song by Gene Pitney than the movie itself. The above picture is a poster I picked up at a used book store. If you can't love a poster of a giant, angry, red-faced Kirk Douglas, you are no real movie fan!

6. The Pit and the Pendulum-Another of those American International Poe pictures with Vincent Price. Despite the low budgets, I think these films hold up well.

7. Yojimbo-Another excellent Akira Kurosawa Samurai flick starring Toshiro Mifune. This one was remade by Sergio Leone as a Western in A Fistful of Dollars. 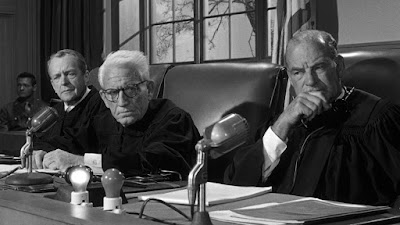 The judges deliberate in Judgement at Nuremburg

Ernst Janning: Judge Haywood... the reason I asked you to come: Those people, those millions of people... I never knew it would come to that. You *must* believe it, *You must* believe it!
Judge Dan Haywood: Herr Janning, it "came to that" the *first time* you sentenced a man to death you *knew* to be innocent.

9.  A Raisin in the Sun-The definitive film version of the Lorraine Hansberry play about the struggles of a black Chicago family on Chicago's South side.

10.Bloodlust, The Beast of Yucca Flats,Hercules and the Captive Women, Hamlet-Some classic Mystery Science Theater episodes were where I saw a handful of 1961 movies. Bloodlust, a low-budget version of The Most Dangerous Game, The Beast of Yucca Flats, featuring B-movie filmmaker Coleman Francis and starring Tor Johnson, Hercules and the Captive Women, a Hercules movie with no Steve Reeves!, Hamlet, yes even the bard gets the MST treatment in this low budget German TV version with Maxamillian Schell as the Dane. 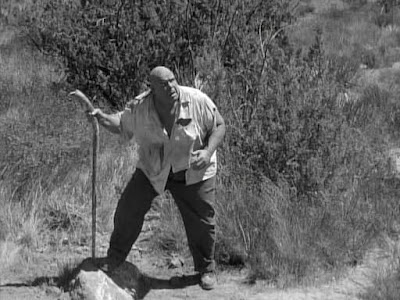 B-movie legend Tor Johnson in The Beast of Yucca Flats 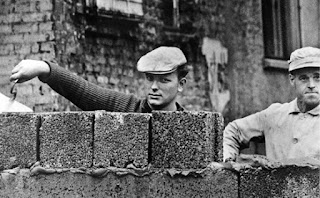