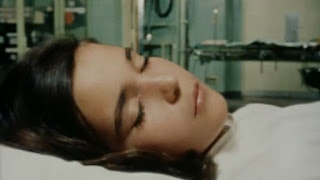 This film begins with a long chord...

These ancient stone structures seem empty and desolate. Maybe that's the point. Even things that are built to last have a shelf life.

We see some forging of hot metal...Seems to be showing something more modern. Rebuilding perhaps? Building something today that will eventually become obsolete?

We now repeat some of the same shots again. Included in this is a path that we will go down again.

There is a close-up of a sedated patient going to surgery I presume. One of her arms is strapped down.

Then we see the end of a bullfight. The bull is not getting the best of this one. I'm not fond of this scene.

We are slowly descending into the palace.

This director really loves things made of stone.

We see an accordion player! I think he's got some female admirers!

I think we see a shot of Venice.

We see some of the earlier shots repeated yet again.

Is this girl ever going to make it to the operating room?

Young girl brushing hair. Does she have a date she's preparing for?

The film shows some of the early images once again and ends.

Ah, life on the Mediterranean!

Those are my notes of Jean Daniel-Pollet's forty-five minute documentary, Mediterranee. I found a copy on YouTube, but it didn't have English subtitles, and though my French is pretty limited, I decided to give it a go. Surprisingly, I think I liked this more because I didn't have to worry about subtitles and was free to just concentrate on the images. Is there a method to this madness? I think there might be... 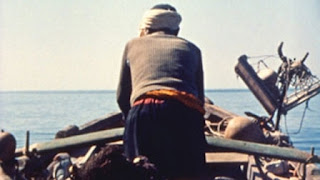 Posted by 1001: A Film Odyssey is produced, directed and written by Chris, a librarian. at 8:21 AM