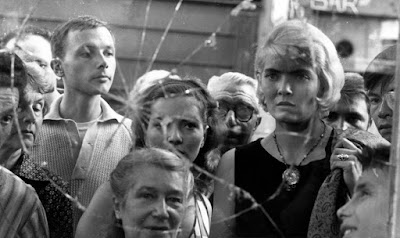 Foreshadowing of death?
in Cleo from 5 to 7

"Agnes Varda is probing, thoughtful, intellectually sensitive to the problems of the artist and the difficulty of making life both happy and full."-Gerald Mast, A Short History of Movies

Recounting the plot of Agnes Varda's Cleo from 5 to 7 doesn't make it seem all that exciting. A pampered young singer is waiting for the results of a medical test in which a fortune teller has forecast her doom to her. She goes around doing various activities, such as: being tended to by her devoted maid, shopping for hats, singing with her song writers, hanging out with her nude model friend, avoiding the issue with the boyfriend she rarely sees before finally meeting a soldier on leave who she seems to form a bit of a bond with. We also get to keep track of the 5-7 hours with a clock at the bottom of the screen that pops up with every new chapter of the ninety-minute film.

Is Cleo a sympathetic character? Eh, not really, she's a bit conceited, but she does seem real and so does the way she busies herself with the events of the day and the way people react to this celebrity seems real.

Some of the French New Wave films connect with me more than others and Cleo is somewhere in the middle of that pack for me. I do really like the black and white photography and sights and sounds of 1961/1962 Paris by day. 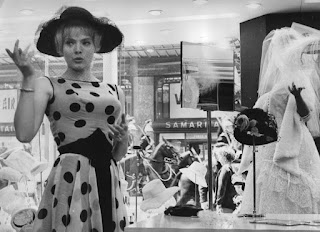 Posted by 1001: A Film Odyssey is produced, directed and written by Chris, a librarian. at 3:49 AM