THE ADVENTURES OF PRINCE ACHMED (1926, GERMANY) 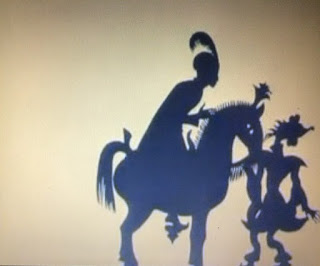 Well defined characters
in The Adventures of Prince Achmed

The Adventures of Prince Achmed is listed in most sources as being the oldest surviving animated feature film. The entire sixty-five minute film is done with silhouetted cutouts from the major innovator of the technicque, Lotte Reiniger. The story itself is a variation of 1001 Arabian Nights, but since the only copy I could find of this was with German subtitles, it proved a bit difficult to keep up with some of the plot. No matter. It's really the technique that is the thing here as Reiniger labored over every frame and the overall making of the film took several years.

A good companion to Achmed is the hour long documentary Lotte Reiniger: Inventor of the Silhouette Film (1999). This allows you to see her creative process, her friendship with director Jean Renoir, her reliance on kindly benefactors and her lifelong creative and romantic relationship with her husband, filmmaker Carl Koch.

My mother always had silhouetted profiles of her children hung up on the wall. I'm glad this film brought back that memory.

Herman's Hermits had a hit with the song "Two Silhouettes on the Shade" in 1965--but that's neither here nor there.

That's two non-English language films in a row I've posted without a English translation...Maybe not a bad way to watch some things. 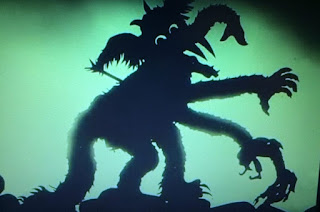 A frightening creature
in The Adventures of Prince Achmed
Posted by 1001: A Film Odyssey is produced, directed and written by Chris, a librarian. at 6:40 AM