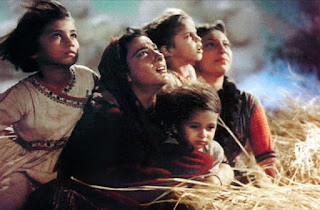 Mother India (1957) is Mehboob Khan's epic story (and remake of his own 1940 film Aurat). The plot of the film involves a families decade long struggle to make ends meet and find some level of happiness. The film begins with the wedding of two young people (Radha and Shamu), whose elaborate ceremony is financed by a wicked moneylender (Sukilala) who cooks the books to make the interest rates so high on them (as well as the other villagers) that they will never be able to pay it off. The ongoing struggles of the family over the years (often involving the sons Ramu and Birju) make up most of the conflict in this three hour epic.

And epic it indeed is. We see epics floods, epic fires, immense tragedy and misery that is often hard to look at. At times, I felt like I was watching a Hindi Grapes of Wrath! But there are moments of levity as well, including an ongoing plot point where Birju breaks the water pitchers of the young women of the village. And among all this,of course, are the songs. Many of the musical numbers seem to be on the serious side because I guess it's really not that appropriate to sing a merry tune while you are plowing and sweating in the field.

Revered Indian actress Narigs plays Radha and is the center of the story. She successfully holds the film together and is the personification of "Mother India."

Other noteworthy cast members include: Sajid Khan as the high spirited young Birju, Sunil Dutt as Birju the adult, and Kanhaiyalal as the moneylender.  Kanhaiyalal played the same role in Aurat in 1940.

There's a lot to admire in Mother India, though I may look for something a little lighter during my next trip to Bollywood. 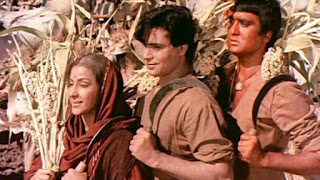 Radha and her sons
in Mother India
Posted by 1001: A Film Odyssey is produced, directed and written by Chris, a librarian. at 6:29 AM