"With his silent productions, he (Abel Gance) made a fuller use of the medium than anyone before or since."
-Kevin Brownlee, The Parade's Gone By 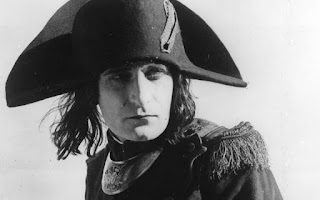 There is indeed much greatness in Abel Gance's 1927 silent film Napoleon. It contains unprecedented epic storytelling (at least from any silent I've seen) and skillful editing that must have been artistically revolutionary at the time. He also used a cast of thousands very effectively...maybe even more so than D. W. Griffith before him.

The way the story is presented could only have been done as a silent. The film would have had to have been slowed down to accommodate dialogue in a talkie. This speed of storytelling is part the uniqueness of silent cinema, which unfortunately was about to be lost forever within about a year of Napoleon's release. But Napoleon certainly sends the silent film out with a bang.

However, there are frustrations with this film as well. Certain parts seem like they could have been edited in the middle to help with story flow. Also, Napoleon Bonaparte appears too noble and Godlike throughout. We see the rise of Napoleon...but wouldn't it have been nice to see the fall? I know Gance had planned to make subsequent Napoleon movies that never came to be...but it's still frustrating.

The version I saw was the Zoetrope 1980 restoration, which was restored by film historian Kevin Brownlow and is enhanced greatly by the score from Carmine Coppola.

"He did all kinds of admirable things. I'm not a mad Napoleon fan, but there's no denying his genius. A very complicated man. But had he never been born, there are millions of people who wouldn't have died. There were unnecessary wars that he fought for his own glorification, which makes him a villain in the last analysis."
-Orson Welles from My Lunches with Orson with Henry Jaglom, edited by Peter Biskind

"There has never been a good or accurate movie about him. Also, I find that all the issues with which it concerns itself are oddly contemporary-the responsibilities and abuses of power, the dynamics of social revolution, the relationship of the individual to the state, war, militarism, etc., so this will not be just a dusty historic pageant but a film about the basic questions of our own times, as well as Napoleon's."
-Stanley Kubrick from Stanley Kubrick: A Biography by Vincent Lobrutto


Blog note: This is the final silent film for me from the 1001 list.
Posted by 1001: A Film Odyssey is produced, directed and written by Chris, a librarian. at 5:15 AM