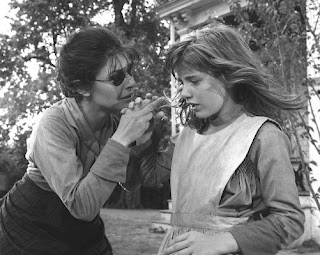 Anne Bancroft and Patty Duke in
The Miracle Worker

The dramatic story of Helen Keller, featuring Oscar winner Patty Duke as Helen and Oscar winner Anne Bancroft as her teacher Annie Sullivan, really gets to the nuts and bolts of what it is like to try to teach someone with a disability. Many of the scenes with Annie and her deaf, dumb and blind student are hard to watch, which frankly may have been the main reason I never watched it before..

Why have I never seen it? You would think I would have made a priority of seeing such a famous film at least once in my life, but the subject matter doesn't always lend itself to casual viewing.  I guess I never had a compelling enough reason before to watch it. Filling glaring holes like this in my movie viewing resume is one reason I started a movie blog in the first place.

Why Am I seeing it now? I'm glad you asked. Our local theater is putting on a production of The Miracle Worker and I've been fortunate enough to be cast in the role of Captain Arthur Keller, Helen's father. Arthur Keller is a well off former Confederate Army captain who you can probably label a bit of a misogynist by modern standards. The main emotion Arthur has towards Helen is pity. The ex-army officer seems unable to bring out the toughness in his own home that Helen needs. The part of Arthur Keller in the movie is played by Victor Jory (Jonas Wilkerson in Gone With the Wind). I don't really have an objection to how Jory plays the role, though the way he speaks dialogue is at a much faster pace than I plan to. I understand of course that live theater is a different animal than a motion picture. We'll see how it goes.

Victory Jory plays the father of the child a bit too harshly and loudly for the already loud tone of the whole-Bosley Crowther, New York Times May 24, 1962 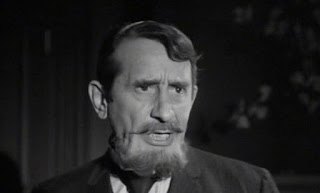 Victor Jory in The Miracle Worker
Posted by 1001: A Film Odyssey is produced, directed and written by Chris, a librarian. at 3:05 AM