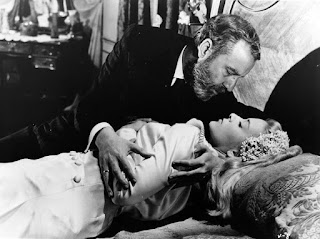 Viridiana (Silvia Pinal) is a nun about to take her vows who is summoned to visit with her Uncle (Fernando Rey) and benefactor before she enters the convent. After she arrives at his house, Uncle is struck by her beauty and resemblance to his deceased wife and declares his love for her! He later drugs her before she goes to sleep and plans to take her virginity, though doesn't go through with the taking away her virginity part. He tells her he has anyway in order for her to stay. She rebuffs him and sets off on the bus trip back to the convent. She then receives the news that her despondent Uncle has committed suicide forcing her return to the house.

Her uncle leaves the estate to her and his illegitimate and neglected son, Jorge (Francisco Rabal). Jorge and Viridiana don't see eye to eye about how to run the house. This is complicated greatly by Viridiana taking in some of the town's beggars, who eventually take over the main house and make a shambles of the place. One of the beggars tries to sexually assault Viridiana and is only stopped by Jorge's bribe of one of the other beggars to turn on the assaulter. 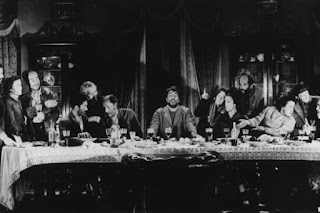 The Last Supper recreated
at the Beggar's Banquet scene in Viridiana

The final scene has Jorge and Ramona (a servant of the house that Jorge is having an affair with) in the house together playing cards. Viridiana comes to their door and joins them. Her hair is pulled down and she is now clearly secularized. She joins them in their game. 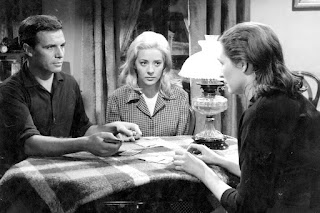 10 thoughts on Viridiana
1. The Uncle's thought process had to go something like, "You're about to go into a convent, I've drugged you,made you dress up as my ex-wife and plan to sexually assault you and blackmail you into staying with me. I'm sure this relationship is going to go so well!"

2. What is it about Luis Bunuel films and older men taking advantage of much younger women? (See The Young One)

3. What is it about Fernando Rey in Luis Bunuel films and older men taking advantage of much younger women (See Tristiana)

4. The meek shall inherit the earth...but the poor are not always so virtuous. When the beggars wreck the house and try to rape Viridiana it is truly sad from a societal standpoint.

5. The beggars recreation of The Last Supper while playing classical music is my favorite (and also the most disturbing) sequence in the film.

6. Bunuel often exhibits a dim view of organized religion, though the secular alternative isn't always a picnic either.

7. Silva Pinal hits the right angelic tone in the early part of this film which makes her putting her hair down in the final scene almost chilling.

8. The card playing sequence in the final scene struck me as odd at first, but upon further reflection it really was all that was needed here.

9. Reviewer Crother also stated he saw the film as being "obvious." I didn't find it that at all.

10. Bunuel is always interesting to me in that I didn't know a lot about his films and they tend to hit me pretty hard.