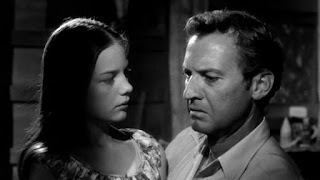 Crowther further asserts that the film appears hard to not be making any point at all. I don't agree with that. I just think Luis Bunuel is making the points he is trying to make in ways that are subtle and very open to interpretation...Oh, Bosely.

The Young One  is basically a five character film:

Miller (Zachary Scott) runs a bee farm on a remote island with his partner (who dies at the opening of the film) leaving behind a teenage grandchild.

Evvie (Kay Meersman) is in her early teens whose life on the island with Miller and her grandfather has pretty much left her an innocent.

Traver (Bernie Hamilton) is a falsely accused black clarinet player who has escaped to the island for refuge.

Rev. Fleetwood (Claudio Brook) is a preacher that comes to the island to baptize Evvie and say a few words over her grandfather's burial place.

Jackson (Crahan Denton) brings the preacher to the island and takes glee in the thought of stringing up Traver after he finds out the fugitive is there.

The characters intertwine in an interesting way. Traver is a hep cat, whose jazzy lingo and clarinet playing are a revelation to the innocent Evvie. Rev. Fleetwood is a very adminrable character, unusual for a representative of organized religion in a Bunuel film. Miller might be the most interesting character of all. It's interesting that we feel any sympathy for him at all considering he takes advantage of a young girl and is clearly racist in his attitude toward Travver. Maybe because he does really care for the girl and doesn't lie about it to the Reverend. Miller is also less racist than Jackson and does stop the other man from killing Traver. Baby steps, I guess.

One scene that stands out in the film for me is when Traver and Miller discuss their similar experiences in serving in Italy in World War II. It seems they do bond a little...if just a little. More baby steps.

I'm looking forward the remaining Bunuel films on this list...they always seem to wind up being something I wasn't expecting. 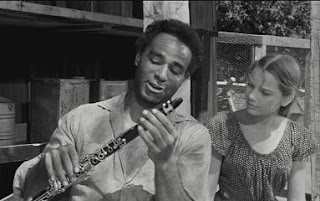 Sometimes a clarinet is just a clarinet
Bernie Hamilton and Kay Meersman
in The Young One
Posted by 1001: A Film Odyssey is produced, directed and written by Chris, a librarian. at 1:24 AM