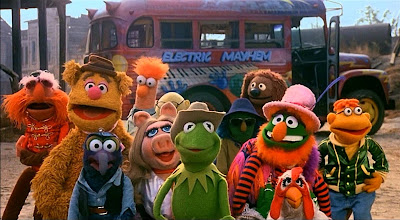 
What can you say about The Muppets? It seems like they've always just been around, doesn't it? I first remember encountering these innovative creations by Jim Henson (a cross between marionettes and puppets) from appearances on Sesame Street during the early stages of that show. The affable Kermit the Frog was the main Muppet during that time. Many of the Muppets also made appearances during the first year of Saturday Night Live.

The popularity of the show led to The Muppet Movie, released in 1979. The plot involves Kermit making a cross country trek to Hollywood to spread the joy of The Rainbow Connection across to the world. He picks up the other Muppets as he goes. All the while, he is pursued by the wicked Doc Hopper (Charles Durning) who wants Kermit to be the spokesman for French fried frog legs.

One interesting point for a kid watching this movie today might be their confusion as to who these people are that are making these strange cameos.Comic legends Milton Berle, Bob Hope and Edgar Bergen (practically on his death bed) are on hand for the festivities. But we also have more dramatic stars such as James Coburn and Elliot Gould making appearances. Steve Martin and Richard Pryor appear to lend some current comedy cred to the fun. Paul Williams provides the music. My favorite cameo might me the cigar chomping Orson Welles as a studio executive who may or may not give these young Muppets their big break.

It's all good fun...and the rest is Muppet history, including my son's later obsession with The Muppets in Space.

Orson Welles plays the benevolent studio executive he
always needed in The Muppet Movie
Posted by 1001: A Film Odyssey is produced, directed and written by Chris, a librarian. at 10:26 AM